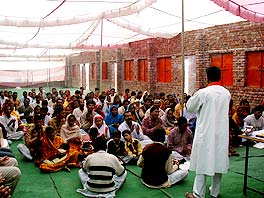 Presbyterian World Mission’s work in international evangelism is moving in a new direction! To learn about Juan Sarmiento, the International Evangelism Catalyst and the work he has been  engaging in with congregations, groups and networks, please click here. To talk with a staff person about endowments and Extra Commitment Opportunities for International Evangelism, please email Carol Wetzel or call her at 800-728-7228 x5253.

Proclaiming the Good News of Jesus Christ Throughout the World

Through its International Evangelism ministry the Presbyterian Church (U.S.A.) seeks to work with congregations, organizations, individuals and overseas partners in proclaiming the good news of Jesus Christ throughout the world.

Engagement in Central Asia and Vietnam

The Office of International Evangelism  continues to be engaged in many parts of the world.  The two chief “frontier areas” that are currently our top priorities are Central Asia and Vietnam.

The May 2010 issue of Presbyterians Today, which is dedicated to Presbyterian World Mission, includes an article on Vietnam.  Part of the article is presented below as it involves our ongoing work.