“It is not the will of God for some to have everything and others to have nothing.”
-Archbishop Oscar Romero, Homily September 10, 1978

Red Uniendo Manos El Salvador (RUMES) is fraternal network composed of grassroots groups, NGOs and church bodies which aims to develop and implement campaigns of awareness and capacity building, social and political advocacy, to propose and promote structural changes and human development, which will enable people to live fulfilling lives, with dignity, in a healthy planet. We work closely with the communities and people most affected, especially women, youth and indigenous people, under a holistic approach that encompasses educational, emotional, economic, social and spiritual well-being. 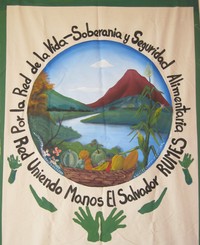 To be a movement of diverse social and religious expressions building citizenship, committed to human development, equity and equality, and the care of the planet, resulting in the enjoyment of a culture of peace.

To create and develop educational and organizational processes to contribute to the reduction of  the vulnerabilities of El Salvador, with the aim of transforming the structures that would enable people to live fulfilling lives in a healthy planet. 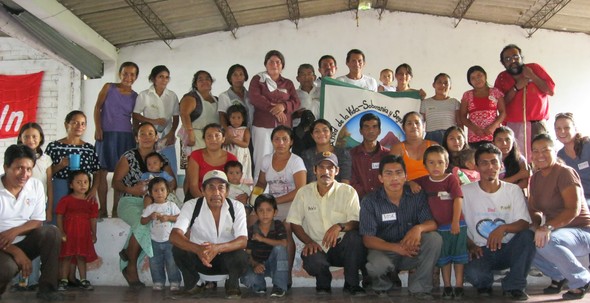 A group of women and men from the community of El Cuzuquito in Rosario de Mora who have completed a two-day training on organic methods of raising small animals. 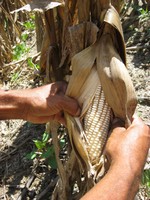 A local farmer proudly displaying an ear of non-GMO, native variety of corn that flourished even in drought conditions this season.

ADVOCACY FOR THE ADOPTION OF A PUBLIC POLICY THAT GUARANTEES FOOD SOVEREIGNTY AND SECURITY, AND INCLUDES A NEW AGRARIAN REFORM IN FAVOR OF SUSTAINABLE SMALL SCALE AND COOPERATIVE FARMING

Over the last year, RUMES has been collaborating with RASA (Network for Sustainable Agriculture and Food Sovereignty) and other allies to promote a holistic Public Policy Proposal that would respect the integrity of both the land and local farmers. This policy would prioritize land for food production (rather than agro-fuels), place the decision-making power with those who produce food in terms of seed use and agricultural inputs (i.e. native seeds, organic fertilizers, etc.), and strengthen the national food economy by emphasizing production for national consumption before production for export.

RUMES will accompany representatives from several civil society groups and organizations from the agricultural sector as they gather to march to the offices of the Legislative Assembly in a symbolic act to deliver the proposal and formally request its consideration and swift approval to the benefit of the Salvadoran people.

PROTEST AGAINST THE CONSTRUCTION OF A WALMART STORE IN DEFENSE OF THE ENVIRONMENT AND LIVELIHOODS IN THE MUNICIPALITY OF MEJICANOS, ON THE OUTSKIRTS OF SAN SALVADOR.

RUMES has supported and participated in coordinated efforts with local community organizations, student movements and civil society groups to detain with the aim of permanently blocking the construction of a Mega-WALMART in Mejicanos. In May 2012, with a change of administration in the local government the new mayor of Mejicanos, touting job creation and “development” extended a building permit that for the past five years the local community had struggled to withhold based on negative impacts on the environment and local economy. Since then RUMES has been involved in efforts to raise awareness and take legal action to keep the process from moving forward. Several protests and press conferences have been organized over the past few months and work continues with a local lawyer to analyze the procurement of permits. Beyond the concerns of imminent and irrevocable damage to the zone, RUMES is also concerned by the threat to food sovereignty as this transnational seeks to entice local growers to produce exclusively for WALMART and according to their strict “quality” and uniformity requirements, including use of genetically modified seeds, agrochemical fertilizers and the discouragement of diversifying crops.

RUMES plans to continue the struggle against this new construction as well as to further develop a campaign to pressure WALMART to change their practices when it comes to contracting local growers; to provide just terms, to permit and encourage sustainable agriculture practices and even invest in the development of the same, and to allow and encourage cooperative and union organizing. 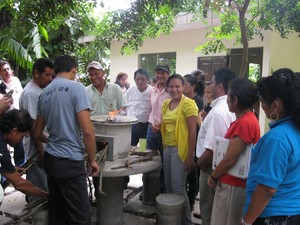 Participants putting what they have learned into practice with a demonstration of a wood-saving, no-smoke stove at the bi-weekly Farmer-to-Farmer Sustainable Agriculture Workshop.

RUMES, in collaboration with RASA and the Salvadoran Lutheran University (ULS) promotes and supports the participation of fifteen campesinos and campesinas (rural, small shareholder famers) in a year-long series of interactive sustainable agriculture workshops. This is a unique opportunity for farmers coming from all three regions of the country, who may have received little or no formal education, to share the wealth of knowledge and experience with other farmers in the university setting. This experience allows for the exchange of seeds, brainstorming of alternative technologies, as well as the construction of communities of solidarity across geographic, cultural and even religious boundaries.

RUMES has been invited to take part in the planning and preparation of the program, and will continue to accompany and support participants as they reproduce the workshops in their own communities, sharing the knowledge and skills that they have learned and continuing to expand the community of solidarity.

Covenant Members (as of September 2011):