A scriptural approach to trade

Atle Sommerfeldt was stunned by the number of biblical texts speaking about trade when he was driven to disciplined study after one ideologically bound conversation too many on the topic.

“I found so much more than I thought,” says Sommerfeldt, the Oslo-based executive director of Norwegian Church Aid (NCA) and a longtime Lutheran pastor, who tackled the troubling texts as part of a Lenten campaign run by NCA in 2005.

The study was published in a small book entitled, Spiritual Reflections on Trade. It was translated into English for use in a workshop at the World Council of Churches Assembly in Porto Alegre, Brazil, in 2006, where a colleague, Molefe Tsele, the general secretary of the South African Council of Churches, responded to the paradigm put forward by the paper. 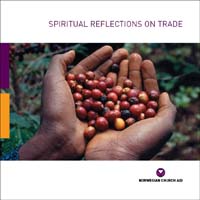 “It really is amazing how rich the Bible is,” says Sommerfeldt, rediscovering its capacity to be ancient and contemporary at the same time. As he honed his biblical work, he also kept a conversation going with a colleague he’s known longer than Tsele – the 16h Century Reformer Martin Luther, who has much to say about swindling the poor, business ethics and the nature of sin, both corporate and personal.

Like they say, everything old is new again. Even when it comes to sin.

Sommerfeldt re-read about the collusion of wealth, big business and a crooked judicial system to steal away poor Naboth’s vineyard, sounding eerily like clusters of land deals in the eastern part of Africa where agricultural land is being bought by wealthy countries, displacing local people and increasing hunger. This time, Ezekiel’s tirade against Tyre had a contemporary ring. Geographically blessed as the wealthiest trading center in the ancient world, the prophet charged that Tyre’s riches led to prosperity and then to tyranny and then idolatry, with an unquestioning reliance on its economic system that ultimately usurps God’s place in the lives of the people. Then he saw David, who craves water from a Bethlehem well during battle and sends three men off to draw it, risking their lives while he pays only a minimal price. He gives no thought to the cost until he is convicted of his own wrong. That sounded strikingly similar to how modern rich countries use subsidies – to which only they have access – at a terrible cost to small farmers. Some small farmers are undone by indifference about the consequences to others when big nations act.. Sommerfeldt cited Haiti’s farming sector, where rich farmers were put out of business when cheap U.S. rice, flooded the island – a consequence unseen by most North Americans and uncovered by media.

So is he an anti-free trader? Or, a free trader in disguise? Or is he someone with Marxist leanings, or, some hybrid economist that doesn’t fit in any category?

Sommerfeldt says none of the above, and, frankly, he’s weary of polarizing debate on the wrong question. He’s a theologian. He believes that churches do not need to bring entrenched ideologies to the global trade

conversation, but a thoughtful theological response to complicated questions. Foremost among those questions is: How can trade lead to welfare without , at the same time, creating injustice? “Our challenge is to turn trade into a force for a good.

“Yes, trade can be a possibility for good. And it can also be a possibility for evil,” he says, adding that understanding human rights violations within a nation helps give outsiders a picture of reality, including the access to food and water. Water is a commodity that is being rapidly privatized in countries like Ghana, where at least 30 percent of the country’s poor have no access to clean water because they cannot afford it. The World Bank encouraged the government to privatize the national water supply and the government took the advice much to the detriment of its own population, according to Sommerfeldt’s research.

Sommerfeldt talks softly, laughs easily, and, conveys no small amount of humility about doing this interview.

He is absolutely convinced that the church cannot walk away from the trade debate since it is a matter of life and death, which is precisely the church’s domain in the world. Such study is hard work and it requires local and global analysis – that many of us don’t want to do. However, evading the conversation isn’t an option when governments and corporations are negotiating “a question of survival in the world.” Care of the vulnerable is likely not the priority when profits are the driving incentive.

The sweep of the biblical narrative is always moving from death to life, whether it is the covenant between God sets with Noah to never destroy humanity again, to the liberation of the Hebrew slaves to the ultimate struggle with the forces of death at Golgotha, says Sommerfeldt. So speaking to the economy is no exception since the market determines who survives, who doesn’t and who prospers.

So, where to begin? Sommerfeldt says to start locally.

“Don’t start with a big philosophy of world. Start out with issues that are close by. Through those there is the possibility for change,” he says, explaining that Norwegians got a surprise crash course in trade ethics when Mozambique and the Dominican Republic came calling for the sale of sugar. Ninety-eight percent of Norway’s sugar comes from Denmark, which subsidizes production so thoroughly that poorer nations cannot possibly compete.

The dilemma got people thinking.

“Trade has brought the inhabitants of the global metropolis closer to one another. Never have we traded as much as we do now. Never have so many people been brought into contact with each other’s goods and services. But this enormous growth in trade has not made the differences any smaller. On the contrary: The gap between rich and poor has only grown in the course of the last 30 years,” Sommerfeldt says.

What’s worse is that poor countries compete for the investment of richer nations, often compromising on protections for the environment, human rights and lax labor conditions to secure contracts – the perennial “race

to the bottom,” as the phrase goes. His book cites the ugliest side of global trade -- that is driven solely by profit -- is most visible in Latin America and Southeast Asia.

Done well, trade can help big countries sell what is impossible to consume at home, and, create markets for smaller countries who have otherwise limited possibilities to sell a small domestic markets. Trade is simply an instrument to “distribute goods” and to supply “the needs of people.”

If such trade keeps people poor, then distribution has to be approached differently. The task is finding ways to ensure justice along the entire production line. He does say that free trade – as it is practiced – is often not just and is very costly for the most poor.

Sommerfeldt says that the church’s role in the trade conversation is unique. Since its members may be actors in any of the forums listed below, the church is the place where rich and poor can come together and develop strategies to rectify abuses in the system in safe space for such a conversation. While the list below isn’t exhaustive, it lays out aspects of his perspective:

“We need to connect on the basis of the church. Our belief is not in the survival of the fittest,

but the dignity of all. Everybody needs to reap the fruits of their labor. And, in the church, all of the voices can be recognized in the room,” says Sommerfeldt, who is quick to say that the church has deserted the poor at many cross roads and the powerful as well. “The church should be the institution in society that is able to promote and facilitate communication in order to heal the world and secure the rights of all.”

Such a task is best done by abandoning ideology for theology, Sommerfeldt contends.

In his book, he writes: “Trade, as a social phenomenon, is free of all ideology. But in an age where one-sided respect for the market’s own ability to solve human problems prevails, trade holds a very special position in society. Trade is, after all, the market’s most important tool. This is why we today are in danger of turning trade into the false god in which we place all our faith …

“Throughout history, this has been the keystone to the Christian faith: That faith in anything other than God leads not to glory, but to corruption. We must, therefore, never allow any human institution or ideology to gain total power or authority. Not even the ideology of trade policy.”