The Trans-Pacific Partnership Agreement, known as the TPP, is a free trade agreement that is under negotiation now between 12 participating countries across the Asia-Pacific region with the goal of liberalizing trade policies. It is, to date, the biggest agreement of its kind and promises to dwarf NAFTA in its importance.

New Zealand, Chile, Brunei and Singapore were the major players at the beginning of the TPP and signed an agreement in 2006 that calls for a 90 percent reduction in tariffs by 2006, and, reduction of all trade tariffs to zero by 2015. The eight other countries negotiating to join the group are Australia, Chile, Canada, Malaysia, Mexico, Peru, the U.S. and Vietnam.

The U.S. trade representative announced that the U.S. would join the meetings and it participated in its first round of talks in 2009. President Barack Obama has reaffirmed his commitment to the TPP during his first trip to Asia in 2009. At present, Japan – the world’s third largest economy – is weighing entrance into the talks. Some experts say that the TPP talks may well open the door for a free trade zone that would include the entire Asia-Pacific region, including China, and boost global trade by 12 per cent. The countries that presently comprise the negotiators have a current economic output of more than $20.5 trillion.

Many civil society groups oppose this agreement. Some dispute the ethics of an unregulated market that allows corporations to operate with an increasing lack of accountability to citizens or to governments, both in developed and developing nations. These voices include labor unions, churches, advocacy groups and a number of elected officials, who, in the case of the latter, are pressuring the U.S. administration to require more transparency in the negotiating process for the Congress.

Other points of contention include: 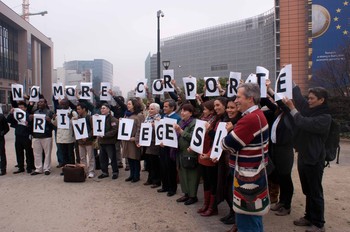 It is fair to say that – since the passage of NAFTA and CAFTA – PCUSA policy is circumspect about further deregulation of trade. No existing policy affirms a market empty of moral considerations or rules. Neither does the church condone acquiring individual, corporate or national gains to the detriment of basic human needs. Repeated General Assemblies have stated that corporations should not have the right to override the sovereignty of governments to regulate public health, labor rights, and environmental protections or to cause harm to indigenous communities or other vulnerable populations.

The best hope is that trade functions as a means of grace[1] to create dignified work that support people’s lives, puts food on the table and undergirds the creation of a just society. The moral test is whether our increasingly globalizing economies support the human enterprise and the larger creation, according to the PCUSA Resolution on Just Globalization, released in 2006. If trade further impoverishes segments of the world’s population, its purpose is distorted and such injustice calls for reshaping global structures that cause economic oppression and creates wealth for only a few at the expense of the many. Such a world is a parody of the biblical vision for just community.