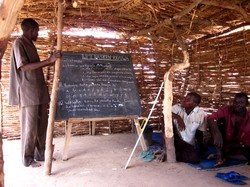 In the region around Maradi, Niger, pastors and evangelists from the Evangelical Church have begun literacy education programs to teach people to read and write. Simple churches, made from mud bricks or millet stalks, often double as informal schools. Many—if not most—of those who come to learn are Muslim. In teaching literacy, the church is helping to improve the lives of people in Niger as it reaches out to them with the Good News of Jesus Christ.

In the region surrounding Maradi, the Evangelical Church in the Republic of Niger (EERN) has numerous congregations in villages where Christians are a very small minority.  Oftentimes they are less than 2 to 5 percent of the population.

In these villages the churches’ pastors and evangelists can be the only residents with a formal education.  As a result, many people—both Christian and Muslim—come to them in order to learn to read and write.  There is a great need for this in a country where the literacy rate is estimated to be only 29 percent nationwide.

While almost none of these pastors and evangelists have training in literacy education, teaching people to read and write Hausa, the indigenous language of the region, has become a large part of their job.  The EERN has even begun to see literacy education as an important means of evangelism. 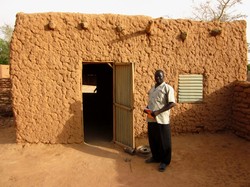 This small mud-brick church building near Maradi, Niger, serves as a worship space and a school. While only 20 people can fit inside the building, about 10 by 15 feet in size, more than 50 gather outside during worship. The doors and windows are left open for people to see and hear. During the week the pastor conducts literacy programs for adult residents of the village.

First and foremost, the goal is to teach people to read and write.  But at the same time literacy education is a way to spread the Good News of the gospel of Jesus Christ.  The Bible is often the only book available in West African languages and therefore it becomes a good tool for literacy education.

While a small number of people embrace Christianity after going through these literacy programs, most remain in their Muslim faith.  But the effort has created an incredible amount of goodwill for the church.  The church is seen as a place that is willing to help its neighbors, regardless of their faith.  And because of this, there is a much increased interest in Christ and his teachings.

Without a doubt the EERN is laying a strong foundation, both for the future growth of the church and for the holistic development of Niger and its people.  When I see the work the EERN is doing in Niger, it brings to my mind Jesus’ words from Matthew 5:16, “Let your light shine before others, so that they may see your good works and give glory to your Father in heaven.” 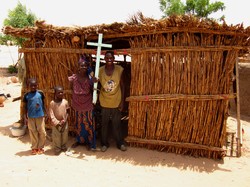 This evangelist and his family have moved to a village outside of Maradi, Niger, to plant the first church. For now the structure is made out of millet stalks. It can accommodate about 20 people inside. Offering literacy programs to village residents has become an important means of evangelism and church growth for the Evangelical Church in the Republic of Niger.

The Presbyterian Church (U.S.A.) is looking for ways to support the EERN in its literacy and evangelism efforts.  The EERN is also a church that would love to grow its connections with the PC(USA).  If you are interested, there are wonderful opportunities for friendship and partnership.

Give to Josh Heikkila's sending and support