In March 2008 Trinity Presbyterian Church in Dallas, Texas, closed its doors and sold its church building in order to merge with another nearby congregation.  One final wish of the church was that one-sixth of the proceeds of the sale of the building—an amount of money equal to $97,000—be given to the Epiphany congregation of the Presbyterian Church of Ghana in the Kaajaano neighborhood of Ghana’s capital, Accra.

The Kaajaano Church primary school is made from rough-hewn wood and sits on a piece of land that is prone to flooding. The money given by Trinity Presbyterian Church, through Grace Presbytery, will allow the ground to be graded and improved and a multi-story concrete block school building to be constructed on the same premises.

Some years before Trinity closed, a relationship had developed between the Texas church and Epiphany due to a Ghanaian family who had emigrated from Accra and settled in Dallas.  This family, Mr. and Mrs. Fiase and their children, helped their two Presbyterian church homes—one in Ghana and one in the United States—develop a friendship and partnership.  In 2007 a group from Dallas traveled to Accra, where they spent time with the Epiphany congregation.  There the Trinity group witnessed firsthand a vibrant congregation in an urban West African setting.

The Kaajaano congregation of the Presbyterian Church of Ghana sits along Accra’s Atlantic coastline, not far from “the Castle,” the 400-year-old Danish-built fort that currently serves as Ghana’s presidential offices.  Kaajaano is now almost 50 years old.  The congregation has over 600 members and an additional 600 children and youth.

These members are primarily the native Ga language–speaking people of Accra, but there are a sizable number of Ewe language speakers, too, migrants who have come to Ghana’s capital from the eastern part of the country.  Like almost all of the Presbyterian congregations in Accra, the church has an active youth program, young adults fellowship group, and women’s Bible study class.

On the same piece of land as the church, the Epiphany congregation runs a kindergarten and primary school. A total of about 300 students attend the school, which is run in partnership with the government through the Ghana Education Service.  Over the past 30 years temporary wooden structures have been put up to house the school, and at times small improvements were made to them.  What was intended to be temporary, though, in fact became semi-permanent.  Kaajaano knew for a long time they had to rebuild the school, but the question was how.  The church was praying that God would give them the ability to make a way forward.

While in Accra, the group from Dallas saw the dilapidated state of the Epiphany church school.  They knew they wanted to work together to improve the condition of the buildings.  But they also had the same question: How?  Only later, when Trinity decided to close its congregation, did they realize where the funds could come from. 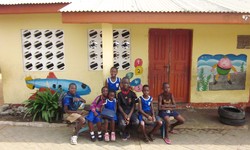 Some current students of the Kaajaano Presbyterian Primary School sitting in front of the building that serves as the kindergarten. There are about 300 students enrolled in the school.

In December 2010 Grace Presbytery gave the final approval for the Trinity proceeds to be sent to Ghana.  At that point in time the work in Ghana truly began.  Kaajaano hired an architect to draw up plans for the new school.  A surveyor was brought in to calculate the costs of construction.  There are hopes that ground will be broken in the second half of 2012.

I know it can be a sad day for people when their church—the place that has been a home for them—decides to close its door.  But even though Trinity is no longer in existence, the members can take heart knowing that their church’s resources are going to help build a Presbyterian school in Accra, Ghana.

One person from Kaajaano even mentioned to me the story of the prophet Elisha’s death in 2 Kings 13.  Even there in the grave, the bones of something that was once holy and anointed by God were able to give life to another.  The same thing, he said, was true of Trinity and Epiphany.  Although Trinity might no longer be alive, it has given life to the school at Epiphany.

As they have learned about the progress of the school, some of the former members of Trinity have expressed interest in coming to Accra, maybe on a working mission trip, or maybe to be present for the day when the completed school building is dedicated.  We’re grateful to God, therefore, that a connection between Grace Presbytery and the Epiphany congregation of the Presbyterian Church of Ghana will continue.

Give to Josh Heikkila's  sending and support