Over the past two years I’ve had the opportunity to visit and preach in several "Northern Outreach Program" (NOP) congregations of the Presbyterian Church of Ghana.  The NOP was started over 20 years ago, with support from the Presbyterian Church (U.S.A.), to evangelize the northern peoples of Ghana, who tend to come from traditional African religious backgrounds. 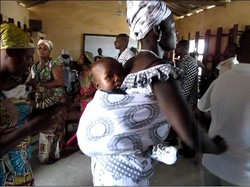 Ghana’s northern ethnic groups have a wonderful tradition of music and dance, which the church has embraced. It wouldn’t be an NOP service without traditional singing and dancing at the end. Even babies participate!

It’s been interesting for me to be welcomed into this community, where many people are new converts to Christianity.  The questions they have about Christian faith are often starkly different than those that come from communities where people have been culturally Christian for generations.

In the U.S. I taught confirmation classes, and the questions asked by 14- and 15-year-old American youth tended to be about secularism and faith.  What is the point of being a Christian in today’s world?  What does Christianity have to say about the purpose and meaning of my life?  I feel I have an idea how to make sense of Christianity for American adolescents, but I’m only now learning how to do this for a northern Ghanaian who is new to Christianity.

Many of the northerners who come to Christianity are from ethnic groups that have rich religious traditions, where there is no doubt that God exists and is an integral part of daily life.  Within these cultures, one encounters rituals of thanksgiving, sacrifice, and offering to God that call upon the spirit of ancestors and invoke blessings and curses.  Honestly, I don’t know enough about these cultures to do them justice.  But let me give you an example of a question that is sometimes asked, with roots in this context.

I’ve seen many new converts to Christianity struggle when it comes time to take part in the Lord’s Supper.  These converts take their Bibles seriously, and they have read the words of Paul in 2 Corinthians 11:

Whoever, therefore, eats the bread or drinks the cup of the Lord in an unworthy manner will be answerable for the body and blood of the Lord. Examine yourselves, and only then eat of the bread and drink of the cup. For all who eat and drink without discerning the body, eat and drink judgment against themselves. For this reason many of you are weak and ill, and some have died.

For cultures in which blessings and curses are real and tangible, these words from the Bible are incredibly resonant.  People ask themselves, What if I have examined myself and I think I am ready, but in fact I am not?  If I partake in communion, I might be bringing weakness, sickness, and even death upon myself, so therefore maybe it’s better not to participate.  There’s a need to remind people that God is a loving God, and there is no punishment for those who are honestly seeking to be disciples of Jesus Christ. 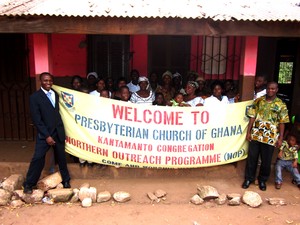 Most NOP congregations meet in school buildings on the grounds of Presbyterian congregations that use the Twi or Ga languages from Ghana’s south.

Many of these new converts have a natural affinity for Christianity, because Christian faith can take this world of traditional religious belief, with its rituals and practices, and make greater sense of it.  It can be revolutionary for people to hear that God is a loving God, who in Jesus Christ is reaching out to help a lost and broken world.

This knowledge of God in Jesus Christ can transform both individual people and entire cultures.  Over time, as people and cultures learn to embrace practices that are good and loving and life-giving, they alter or even abandon practices that are not.  This is something that needs to be done in all cultures—whether in Africa, Europe, the Americas, or anyplace else.

All of this reminds me of the words of the Apostle Paul in Acts 17, when he speaks to the people gathered in Athens, and he uses the religion they are practicing as a means to preach and explain Jesus Christ:

"Athenians, I see how extremely religious you are in every way. For as I went through the city and looked carefully at the objects of your worship, I found among them an altar with the inscription, 'To an unknown god.' What therefore you worship as unknown, this I proclaim to you. The God who made the world and everything in it … For ‘In him we live and move and have our being’; as even some of your own poets have said, ‘For we too are his offspring.’ "

Paul was helping the people of Athens see how Christ was already working among them, even when they didn’t see it themselves.

This also brings to mind something that John Calvin wrote in his Institutes, that Scripture is the eyeglasses that bring into focus a blurry and unclear world.  Without the Good News of the gospel, we’re prone to misunderstanding.  Tornadoes and hurricanes may lead us to believe that God is vengeful instead of loving.  Without Scripture, we may place our trust in idols like money or power, instead of in God.

We may even think that we ourselves are gods, doing everything in our power to help ourselves at the expense of other people.  But knowledge of Jesus Christ helps us to know the nature of God, and in the end, it helps us to correct these mistakes.

Give to Josh Heikkila's  sending and support