In the beginning of September I went to a Presbyterian youth gathering in Ghana where a young, well-liked pastor had the youth up on their feet, praying and moving about with a charismatic fervor.  There were two prayers the pastor employed that have become quite common in Ghana these days, which touched the youth both emotionally and spiritually. 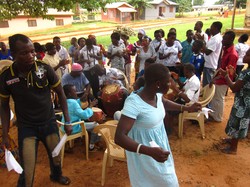 Youth in rural communities are often left at a disadvantage because of bad schools, lack of access to health care, and few job opportunities. They often flock to cities, where the job prospects are also dim, because subsistence farming is a difficult life. They need the church to fight for them, working toward a fair and just society. Here a church youth group near Hohoe, Ghana, sings and dances to traditional music of the Ewe ethnic group.

In the first prayer the pastor asked the youth to raise their arms and stretch out their palms in the direction of the places where they live. The youth were going to pray to God, asking God to destroy any evil or harm that was being fashioned against them—in their homes, schools and workplaces, either by Satan or other human beings.  May this evil and these persons be struck down in Jesus’ name, the youth were instructed to pray.  If any curses were being formed against the youth, their prayers should ask God for the curses to be “returned to sender.”  In other words, the curses would affect the ones originating them rather than the intended victims.

In the second prayer the pastor asked the youth to be down on their knees.  The youth were going to symbolically uproot and burn anything that had been planted in the ground to cause them harm.  Some say that in traditional beliefs, family and friends from your hometown are thought to plant charms and idols in the ground, using witchcraft to hold you back.  Rather than wanting goodness for you, they are in fact believed to want evil.  Only by asking God to help you uproot and destroy these charms can you be free from their malevolent effects.

At times I find myself very confused by religious life in Ghana.  The people I work with and those who have become my friends are normally so incredibly joyful, hospitable, and caring.  In church, they sing beautiful music that lifts your heart to God.  I admire the large number of youth involved in the church, and the energy and excitement they bring to prayer and worship.  But in many church settings these same people are taught to pray with passion for each other’s destruction.  I don’t get it.  Is this the Biblical example of Jesus?

In a recent survey Ghana came out on top as the most religious country on earth.  Ninety-six percent of people call themselves religious.  Ghana is number one!  Compare this to the United States, where the figure is 60 percent.  But what exactly does this 96 percent means?  The country is full of so much religious energy, and this energy could be harnessed for so much good.  But I wonder, is much of it being wasted, in prayers and programs like these? 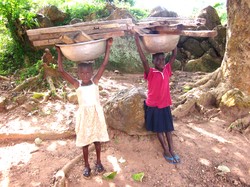 Children are often forced to work in order to contribute to the economic well-being of the family. In rural areas they labor on farms and gather water and firewood for the household. In cities they can be seen on the side of busy roads, selling water and snacks to passing motorists. Although education is supposedly free and compulsory in Ghana, many families still can’t afford to send their children to school. Here two primary school–aged girls collect firewood for the family.

When you listen to people’s prayers, you begin to sense where the frustration is coming from.  Relative to its neighbors, Ghana is doing well, but it’s still a country facing deep poverty, struggling to cope in a globalized world.  Bad schools have left youth poorly educated and unprepared for jobs.  A lack of jobs means even those with good schooling can’t find employment.  A shortage of doctors and clinics has left health care out of reach of many.  All these problems compounded together lead to family and community strife.

The situation is ripe in which pastors can whip up congregants, helping them point fingers at each other, making accusations of curses and witchcraft to explain their troubles.  When I see these things, I worry that church has become a place where all too often people are distracted from the real problems.  Look at these family members in underdeveloped hometowns, supposedly practicing witchcraft.  Chances are they are subsistence farmers, themselves facing the difficulties of life.  While they might be dealing with the same problems of poverty, in my opinion they are clearly not the cause of them.

One thing that has struck me about Ghana is how little talk of justice you find in society.  Cultural factors lead people to blame problems on curses and witchcraft, but they overlook other destructive forces, which might actually be to blame.  There is little or no mention of corrupt politicians who embezzle money instead of spending it on development; or of a system that forces Ghana to open itself up to cheap and substandard imports, rather than developing a strong economic base of its own; or of international agreements that prohibit spending money on schools, hospitals, agriculture, and water projects that would improve the quality of life for its citizens.

I ask you to join me to pray for the churches in Ghana, so that God helps them identify and lift up ordained and lay leaders who will challenge these destructive tendencies that look to witchcraft and curses, leaders who will instead harness the religious energy to bring about a just society for all, especially for youth, women, and children living in poverty.  There are a few doing this work already, but they often meet the scorn and ridicule of many of their colleagues.  Let’s pray that God gives them the courage and strength to continue and grow this much needed work.