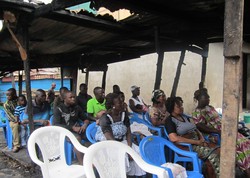 The Konkomba Market Evangelical Presbyterian Church gathering for worship in June 2012, two days after fire burned the church building to the ground. The young men and women were able to raise some of the charred beams and roof in order to hold Sunday worship. (Photo by Elder Solomon Bagmae)

For about two years now I’ve been helping a small congregation near my house, the Konkomba Market Evangelical Presbyterian Church, with occasional pastoral ministry.  The congregation is situated in a neighborhood of Accra called Agbogbloshie, which gained notoriety some time ago because it was being used as a dumping ground for discarded computers from Europe and the U.S.  (You can see an article on the Web from the New York Times, which is worth looking at, because the pictures are quite striking.) 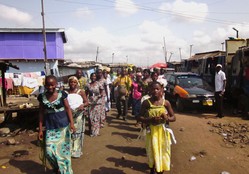 The young men and women of the congregation, processing through the neighborhood on Palm Sunday morning.

Agbogbloshie is perhaps the closest thing Accra has to a slum or shantytown.  Often when I tell Ghanaians I work there, they think I’m joking.  When they realize I’m not, they say I shouldn’t go to Agbogbloshie, because they find it to be an embarrassment to the country.  But I actually think the place is quite interesting.  Part of the neighborhood that sits next to a constantly burning trash heap goes by the name Sodom and Gomorrah.  Accra’s Onion Market is located in the neighborhood, and the people who live and work around it are all migrants from onion-growing regions in Niger.  There is also a market for recycled metal, which is melted down and refashioned into a wide variety of cooking equipment for the house. 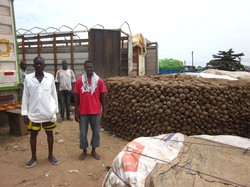 Yams have been offloaded from a truck arriving from the north and stacked in a neat circle. The market is quiet on Sunday, but on Monday morning it will be packed with people. Although it is less than 300 miles to Accra from the Konkomba regions in the north of Ghana, it will take three days for the trucks to travel on the potholed roads.

The Konkomba Market congregation shares its name with Accra’s main yam market, and the two are adjacent to each other in Agbogbloshie.  The Konkomba people, who come from the northeastern part of Ghana, are known throughout the country as yam growers.  The farmers in the north send their produce to Accra to be sold in the market, and many young Konkomba men and women come to the city to work there and represent their families.  The congregation is comprised of about 120 of these young men and women.

Although the Konkomba people have a small and growing Christian presence, the ethnic group remains predominantly animist.  The E.P. Church first began to do evangelism among them in the 1950s.  It was only in the late 1990s that the Bible was fully translated into the Konkomba language.  If you happen to be familiar with the hymn in the Presbyterian hymnal, “Jesu, Jesu, Fill Us With Your Love,” the name of the tune, Chereponi, is a town in the Konkomba region of Ghana. 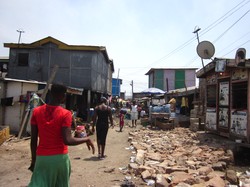 A view of one of the streets in Agbogbloshie. The neighborhood is still considered an informal settlement by the Ghanaian government. The concrete blocks on the ground help when the rainy season starts in May and the ground becomes muddy.

Shortly after I began working at the congregation, a fire swept through its section of Agbogbloshie and burned the chapel to the ground.  Because much of the neighborhood is without electricity, people use candles for light and combined with the makeshift wooden houses, this creates a dangerous mix.  Within a few weeks the congregation was able to scrape together some money and replace the burned wooden structure with a simple concrete one.  In the future they hope to build a permanent church building, with a fellowship hall, Sunday School room, and office.

Although I only make it to the Konkomba congregation for worship about once a month, the place has become very important to me.  Whenever I go there, people ask me why I left the comfort of the U.S. to come and work in a place like Agbogbloshie.  Many of them wish they had enough financial resources to move out, so they’re surprised to find a foreigner there among them.  But when you experience the warmth and friendliness of the congregation, the joyful worship expressed in song and dance, and the dedicated, hardworking people, you’ll also understand why and want to come back. 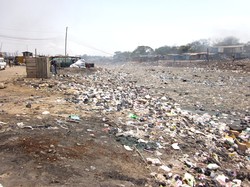 A view of the river where it meets the lagoon. By the time the river in Accra reaches Agbogbloshie, it has become completely choked with trash. The environmental problems facing the neighborhood are daunting.

The young men and women of the congregation are a resourceful group.  They have a desire to further their educations and seek better employment; only a lack of money is holding them back.  In addition, they have a vision for improvement of their home region in the north.  My hope is that the young men and women of the Konkomba Market E.P. Church can be empowered to play a role in the evangelization and development of the Konkomba lands.  As is often the case in Ghana, with the help of a little push, they will be able to go a long way.

In the past year Lake Erie Presbytery of the PC(USA) entered into a partnership with the Upper Northern Presbytery of the E.P. Church, which includes the Konkomba region of Ghana.  I look forward to what will develop between them as they live into their relationship as brothers and sisters in Jesus Christ.  I invite you to join us in this journey, with your prayers and your financial support.  Without you, none of the work we do in Ghana would be possible.  May God bless you, and also bless the work of the E.P. Church among the Konkomba people!