Once we were no people, now we are God’s people.
—adapted from I Peter 2:10

In almost all the countries of West Africa, Christians are a minority.  In Togo, for example, those who practice African traditional religion are about 40 percent of the population, and Muslims 20 percent.  In Niger, Christians number about 1 percent, and Muslims 98 percent.  An exception is Ghana, where Christians now exceed 75 percent.  But even in Ghana there is a sizable area in the north of the country where neither Christianity nor Islam have made strong inroads.  Therefore evangelism is one of the most important priorities for our partners in West Africa. 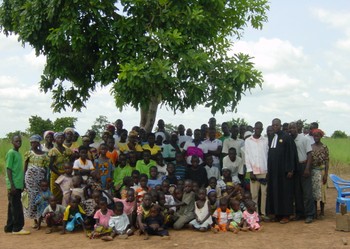 Rev. David Bindati in the village of Nambiri, outside of Saboba, Ghana, on the day when the church added 72 new disciples to its numbers. (Photo provided by Rev. Bindati.)

Recently I was talking with one young pastor in the Evangelical Presbyterian Church Ghana, Rev. David Bindati, who in 2011 finished a year of studies at Union Seminary in Virginia.  Upon his return to Ghana the church sent David to work in the northeastern town of Saboba.  Although the E. P. Church has been present in Saboba since 1968, many of the villages surrounding the town are without churches.

According to David, there was an elder from the town congregation who had routinely been going to his home village to preach the gospel.  One day last year the residents of this village expressed to the elder a desire to be baptized.  Rev. David went out with the elder on a Sunday afternoon, and that day he baptized 72 people under a tree.

Events like this bring to my mind passages from Acts of the Apostles, such as 2:46-47:  “Day by day, as they spent much time together in the temple, they broke bread at home and ate their food with glad and generous hearts, praising God and having the goodwill of all the people. And day by day the Lord added to their number those who were being saved.”

Day by day, the Lord added to their number those who were being saved. 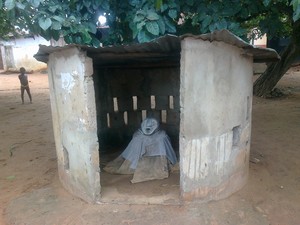 An example of a traditional shrine in Ghana. There is a debate among Western and African Christians as to whether these shrines are the work of Satan trapping people in darkness or a means by which God has prepared the hearts of West Africans to receive the gospel of Jesus Christ.

When you listen to testimony of people who have come to Christianity, you begin to recognize the importance of this evangelism work in West Africa.  People will tell you how becoming a disciple of Jesus Christ has made them more fully aware that God loves them and is present in their lives. In fact, these new Christians echo words written in I Peter 2:10:  Before, we felt marginalized and neglected. But now that Christ is with us, we know for sure we are God’s people!  The resulting transformation in both the individual and community is remarkable.

There are some American missionaries here in West Africa who see evangelism as necessary to free people from the bondage of Satan, who has trapped them in darkness.  One of these missionaries, upon seeing the traditional shrines and altars that are a part of the culture, wrote about the ‘stronghold that Satan has over people through the traditional religion.’  In order to free people from the grip of Satan, they teach that all vestiges of the tradition must be abandoned.

This is in direct contrast to what the late Professor Kwame Bediako, a Ghanaian Presbyterian who founded Akrofi Christaller Institute, saw in African traditional religion.  In his writings he explains how traditional religion has even prepared people for the coming of Jesus Christ.  For example, in the traditional culture a town chief would have a linguist who sits at his right hand to speak and mediate on his behalf.  When West Africans learn of Jesus, who sits at the right hand of God, they understand the relationship between Jesus and God immediately.  The African tradition, in fact, has opened the gospel for them.

When I think of the work of evangelism in West Africa, I often think of Paul in Acts 17, when he was preaching in Athens.  There Paul says to the people, “Athenians, I see how extremely religious you are in every way.  For as I went through the city and looked carefully at the objects of your worship, I found among them an altar with the inscription, ‘To an unknown god.’  What therefore you worship as unknown, this I proclaim to you.”  Paul appreciated the good things about the religious tradition of Athens, and then he went on to preach the Good News of Jesus Christ.

What is going on today in West Africa is definitely a continuation of the ministry started by Peter and Paul and the apostles some 2,000 years ago in Jerusalem.  And it is having a positive impact on the people and the culture.  As we in the Presbyterian Church (U.S.A.) seek out places where we can support our partners in evangelism, I ask for your prayers and financial support.  Together with our West African brothers and sisters, let us have glad and generous hearts, praising God and seeking the goodwill of the people.