Now may the Lord of peace himself give you peace at all times in all ways.
- II Thessalonians 3:16 (NRSV) 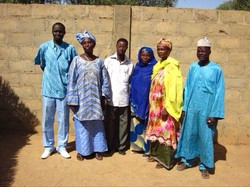 The teachers at the church's primary school in the town of Aguie. Although it is a Christian school, there are some Muslim teachers on staff.

During the month of October, I had the opportunity to travel through several presbyteries of our denomination as part of the International Peacemaking Program.  I was together with one of our partners from Niger, the Rev. Sani Nomaou, who is president of the Evangelical Church in the Republic of Niger (which is widely known by its French initials, EERN).

Throughout our travels, Rev. Sani spoke about the work the EERN is doing in Niger in areas of health, education, and development.  This is in addition to the evangelism of the church, their work to spread the Good News of the Gospel of Jesus Christ to the population of the country.  They have a difficult task at hand in all of these areas. 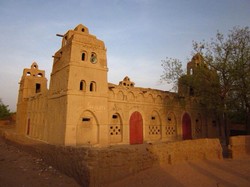 A mud mosque in a village near the city of Tahoua. While passing through town, we stopped to admire the mosque's interesting architecture. I was amazed that such a building could be built out of mud!

Each year, the United Nations ranks the countries of the world in terms of human development.  In 2013, Niger ranked at the very bottom, 187 out of 187 countries.  When you look at the indicators of human development, you can see why Niger ranks so low.  About one out of five children will die before their fifth birthday.  Approximately one out of seven women will die during childbirth.  The literacy rate is only about 30%.  More than half the population suffers from food insecurity, not knowing for sure where the next meal will come from.

The church is also very small in Niger.  By some estimates, Christians are only 1% of the population, and Muslims 98%.

After he spoke one night in Virginia, I remember a woman commenting about Rev. Sani's presentation:  "I'm now learning for the very first time that it is possible for Muslims and Christians to live together in peace.  I am so encouraged by your message.  Before tonight, I didn't know this was possible." 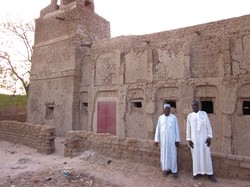 Some Muslim residents of the village welcomed us with the typical warmth and hospitality you see in Niger.

Rev. Sani shared again and again with members of the Presbyterian Church (USA) stories of how Christian and Muslim communities in Niger are coming together to build a culture of peace in the country.  The lead is being taken by Christian pastors and Muslim imams, as they come together and share with their respective communities the messages of peace that are taught by both Jesus Christ and the Quran.

About a year ago, when the neighboring country of Nigeria was experiencing some tension between its Christian and Muslim populations, imams and pastors in Niger came together to lift up peace in the country.  Because of efforts like this, Niger has never experienced the inter-religious violence other countries have seen.

In many ways, Niger has an advantage.  Whereas in Nigeria, the Muslim Christian divide often corresponds with ethnic, economic, and geographic divisions, Muslims and Christians in Niger have a lot in common with one another.  They mostly come from the same Hausa ethnic group.  They share the same language and culture, and they are both struggling for a similar economic well-being.  As a result, they see themselves as close brothers and sisters, who happen to have a different faith. 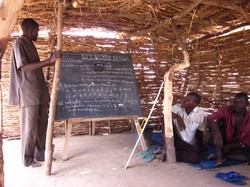 A pastor of the EERN is teaching local Muslim men to read and write in the local Hausa language. Because of what the church is doing in the community, many Muslim residents eagerly embrace the presence of Christians among them, even though these Muslims themselves will probably never convert to Christianity.

But still, there is something special about the people and culture in Niger.  Again and again, I saw members of our PC(USA) churches asking Rev. Sani:  "What is it about Niger that has enabled it to be so peaceful in an area of the world more known for its strife?"  It's difficult to pin down the exact answer, but I think it's a question we need to keep asking.

Perhaps because almost everyone in Niger is struggling to eke out a living in a very harsh climate and environment, there is a sense of solidarity among people.  And the culture, together with its churches and mosques, teaches young people to look for what they share with others, not for what divides them.

I've heard people in this country say many times, "Why would we turn to violence? Nothing is ever solved by violence!"  When I've heard this said, I've often found myself thinking, how can we help the people of Niger teach this lesson, both to us in the U.S., and to people in other countries? Nothing is ever solved by violence.  It's definitely a lesson more people need to learn.

Thank you for this opportunity to serve God in this place, at this time.  If you have not already made a commitment to this work, please prayerfully consider joining with me and our West African partners in ministry through your prayers, correspondence and financial gifts.  Together we can be a part of what God is doing in West Africa!