A letter from Josh Heikkila serving as Regional Liaison for West Africa, based in Ghana

Churning butter.  It’s not something that’s really done in West Africa.  But a few years ago I listened online to a sermon preached at the Fourth Presbyterian Church of Chicago—the church that ordained me—and since that time, the thought of churning butter has left a strong impression on my mind. I guess I need to explain. 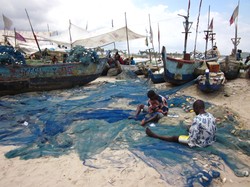 Fishermen in Ghana mending their nets, after a long day out at sea 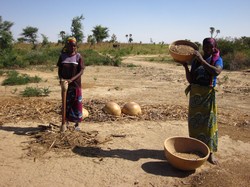 Although I love worship in West Africa—its exuberant and expressive nature, filled with song and dance—from time to time I also miss our Presbyterian worship in the U.S. with its thoughtful sermons and contemplative prayers.  Since Fourth Presbyterian Church posts podcasts of its worship services online, listening from Ghana is an easy click away.

In that sermon the preacher mentioned the need for each of us to recognize the presence—even the closeness—of God in our daily lives.  It’s a dilemma, I think, prevalent in both the U.S. and West Africa.  We want to know and believe God is close, showing us love and care, even though sometimes the opposite may very much seem to be the case.

You can see this dilemma reflected in scripture.  The Apostle Paul says in I Corinthians 13:  now we see only dimly, like a poor reflection in an old mirror, but at a time to come, we will see face to face.  Or in Acts 17:  we grope for God, as if lost and searching to try and find God, though God is in fact close to each of us.

The mention of churning butter was a reference to Carmina Gadelica, which is a collection of prayers, blessings, and hymns from 19th century Scotland.  These prayers from daily life were things people might say while taking care of mundane tasks—like churning butter—which needed to be done to survive. As you read through these prayers, it seems as if 21st century West Africa has a lot in common with 19th century Scotland.

Although the modern world is coming to West Africa—there are medical technicians who work with the latest equipment, bankers who follow Wall Street data, smartphones with Internet access everywhere you look—for many people, if not most, life still revolves around tilling the soil, fishing in lakes and rivers, carrying water home from the well, cooking over firewood gathered by hand. I believe that God is present in all these things, but it’s sometimes a struggle to convince others this is true.

In Ghana, for instance, it sometimes seems like people are seeking grand miracles from God.  In prayers they ask for money to erase poverty, healing to eliminate all sickness, the removal of every obstacle in their path to success.  I often feel that in the search for these grand miracles, people overlook the presence of God in the small things, and in the routine of daily life.

I like one prayer from Carmina Gadelica, a Herding Blessing, and part of it goes like this: 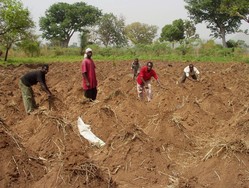 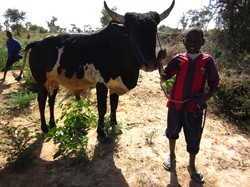 From rocks, from drifts, from streams,
From crooked ways, from destructive pits …

Beloved Columba, thou saint of many virtues,
Encompass the breeding cows, bestow thy protection on the herds.

As I thought of this prayer of the shepherd, asking for protection for the herd, it brought to my mind the people I’ve come to know in West Africa and the ways I pray for them.

As we enter the season of Advent and Christmas, I ask you to join me in these prayers, too.  Pray for fishermen who sit along lakes and rivers mending their nets.  Just as Jesus called Peter and Andrew, James and John, may God also lead and guide the fishermen, and keep them safe—those who toil every day in difficult conditions so that people are fed. Pray for women who buy the fish, who smoke it over open fires so that it can be traded in the market, bought and sold, and brought home to be cooked.

Pray for women in Niger, who spend hours each day pounding millet, who use wind to separate grain from chaff, and who then grind it by hand so that it can be made into bread to nourish their families.   Pray for boys and girls who lead cattle out into the fields, who are sent to the well in the morning and evening (and go to school in the hours in between) so there is enough water in the household for cooking and cleaning.

Pray for women and men who toil in the fields, raising earthen mounds for yams, beans, cassava, and corn, so that when heavy rains come, the seeds don’t get washed away.  For people whose lives depend on each year’s harvest, pray that God sends enough rain (but not too much!) so that the family may be properly nourished.

I’m grateful for the support each of you gives, which allows us to work together with our partners in West Africa.  Projects supported by American Presbyterians have built wells in rural communities and have improved the lives of women and men engaged in farming and fishing.  Together, we are having an impact and making a difference!

At the time I write this letter, only about half of the support I need ($83,000 each year to keep me in service) has been contributed for this year.  As 2015 comes to a close, I hope you will consider making a donation or increasing your donation for this year, and committing again in 2016, so together we can continue to be engaged with our partners in West Africa

May God bless you for all you do.
Josh