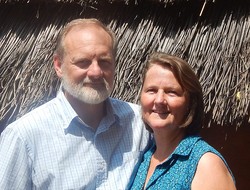 Give to Michael and Rachel's ministryDownload Michael & Rachel's prayer card

Michael and Rachel will next be in the USA September 2015 - June 2016.  Email them to extend an invitation to visit your congregation or organization.

About Michael and Rachel Weller's ministry
Michael and Rachel Weller were appointed in 1994 to serve in Ethiopia with the Ethiopian Evangelical Church Mekane Yesus (EECMY). Michael is PC(USA)’s regional liaison for the Horn of Africa, where PC(USA) works with partner churches in Sudan, South Sudan and Ethiopia. Rachel is health coordinator for the East and West Gambella Bethel Synods of the EECMY in western Ethiopia.

Rachel’s work with three medical clinics in one of the most remote parts of Ethiopia offers her many challenges, the largest of which is finding well-trained medical staff willing to live and work there. She is encouraged by the commitment of the East and West Gambella Bethel Synods to overcoming these obstacles so that the people of the area may have access to health care.

Country context
Ethiopia is the second most populous country in Africa. It has been an independent country since ancient times, and unlike other African countries, it maintained its freedom from colonial rule except for a brief period of Italian occupation from 1936 to 1941. Its monarchy was overthrown in 1974 and the country is now a democratic republic. More than half of the population is Christian and a third is Muslim. While Ethiopia has struggled with severe poverty and hunger issues, it currently boasts one of the fastest-growing economies on the African continent.

The Presbyterian Church (U.S.A.) has worked in partnership with the people of Ethiopia for nearly a century. The people of the five Bethel Synods, in the west and southwestern part of the country have a keen sense of kinship with Presbyterians in the United States. Michael and Rachel are very proud to be a part of both communities to be a conduit through which a deeper understanding of God is communicated.

About Michael and Rachel Weller
The Wellers began their service in Ethiopia in Dembi Dollo in the remote western highlands, where the first Presbyterian mission was established in 1919 to combat the worldwide flu epidemic. From 1994 to 2001, Michael taught at the Gidada Bible School, which trains adults for various positions of leadership within the church. Michael helped put together a curriculum so students could receive a diploma at the end of three years of study and pursue ordination as pastors.

Watch a video in which Michael talks about his work in Ethiopia.

Michael moved to Addis in 2004 to teach at the Mekane Yesus Seminary. He also filled in temporarily as the coordinator of the Bethel Synods Coordination Office, the office through which the EECMY relates to partner churches around the globe.

Michael was born in Durham, North Carolina. He spent his school years in Norfolk, Virginia, where he was a member of Coleman Place Presbyterian Church. After graduating from Randolph-Macon College, in Ashland, Virginia, he went to Cairo, Egypt, with the PC(USA)’s Volunteer In Mission program and taught English at Ramses College for Girls. He received his M.Div. from Union Theological Seminary in Richmond, Virginia.

Rachel was born and raised in Ethiopia, where her parents were missionaries with the United Presbyterian Church. Returning to the States after high school, she earned an R.N. from West Penn Hospital School of Nursing in Pittsburgh, Pennsylvania.  Rachel served as a volunteer in mission in Egypt at Tanta American Hospital for two years and met Michael while on a retreat for the volunteers at Mt. Sinai. They were married before Michael entered seminary.

The Wellers are the parents of four children. After spending most of their childhood in Ethiopia the Weller children are now moving into adulthood. Brian lives and works in western Pennsylvania. Amira is in high school in South Africa. Thomas is in high school Addis Ababa, and Lydia studies at the Rift Valley Academy in Kenya.