Nativity of the Lord / Christmas 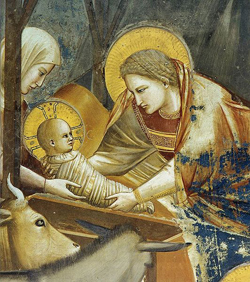 Since at least the fourth century in Rome, Christians have celebrated the incarnation and nativity of Jesus Christ on December 25. There is more than one theory about the origin of this festival day. Some have suggested that it was established to replace the Roman feast of Natalis Solis Invicti (the “birthday of the unconquered sun”). Others believe that Jesus was conceived on March 25 (coinciding with the date of his crucifixion, as recorded by some witnesses in the early church); December 25 is exactly nine months later.

Regardless, the time between December 25 and January 6 (Epiphany) has become an occasion for the church to celebrate and give thanks for the arrival of God’s Word made flesh — the light of God that has come into the world, the light that even death could not extinguish.

What is “Christmas”? It is three words: God in flesh; or four syllables: in-car-na-tion. The Gospel according to John (1:14) tells us, “The Word became flesh and lived among us, … full of grace and truth.” Christmas proclaims that God has come in flesh, has come “to save us all from Satan’s power.” Christmas celebrates far more than a birthday; Christmas acclaims the advent of messianic salvation. Christ was sent among us in order to save us. …

What we pay homage to at Christmas, therefore, is that the ultimate fulfillment of God’s saving purpose begins with the birth of Jesus, the messianic Savior. God’s only Son is born among us in order to save the world. This is the message of Christmas.

From the beginning of time, God’s saving purpose has been at work. God has raised up the seed of Abraham, including Moses and Gideon and Samson and John the Baptist. Through all these generations, God has been faithfully at work raising persons to bring us the Davidic Messiah, the messianic King, the Son of the Most High who will ascend the throne of David. Through all of human history, God has been bringing forth Jesus Christ. Now through the birth of the Savior, God’s purpose will be fulfilled. God has acted to save God’s people. The Christ child is born for the saving of the world.

Read the Revised Common Lectionary Scripture lessons for the Nativity of the Lord:

A Service of Lessons and Carols

This Service of Lessons and Carols is adapted from the Festival of Nine Lessons and Carols that has been celebrated annually at King’s College, Cambridge, for almost a century. The nine Scripture lessons are those traditionally used at the festival, while the carols provided to accompany each passage have been selected from Glory to God (2013) and the Presbyterian Hymnal (1990). Pastors and church musicians are encouraged to consider other hymns or appropriate spiritual songs, taking into account the cultural context and worship style of the congregation. The multiple readings present an opportunity to involve a number of different people from the congregation in the leadership of worship. Near the conclusion of the service, a time is set aside for prayers of thanksgiving and intercessions for the church and the world.

These prayers might be used in a variety of settings: Opening Prayers (at the beginning of worship) or concluding collects (after the Prayers of the People); for church websites or newsletters; or in personal, small group or family devotion.

Find resources for the Nativity of the Lord from Biblical and Confessional Resources for Worship.

Season of Advent | Epiphany of the Lord