The Roma are a much-maligned people who live primarily in Eastern Europe but who exist all over the world: Russia, Spain, the United States and Brazil, among other places. The word Rom means man, and Roma is the plural, meaning men or humankind. The Roma are probably more commonly known as Gypsies, a name that derives from the mistaken belief that they originate from Egypt. Actually they probably emerged from central India in the 11th or 12th century. From Gypsy we derive our word gyp, meaning cheat, referring to the commonplace that Gypsies are thieves. A nomadic, wandering people, they were feared not only as thieves but as baby-stealers and fortunetellers.  This led to their enslavement in Romania and much persecution throughout Europe, culminating in the Holocaust in which the Nazis killed between 220,000 and 1.5 million. Their reputation for undesirability even passed to the United States, which barred their immigration in 1885.

Population figures in the past for the Roma vary because, being a traditionally peripatetic people, accurate census data were hard to obtain. In Central Eastern Europe most Roma are now settled due largely to the enforced settlement policies of the regimes of the Communist era. Nevertheless, accurate census figures are still difficult to obtain because many countries do not include ethnicity in their census data. Current estimates worldwide for the Roma range between four million and 14 million.

While feared by some, they have been romanticized in literature as an untamable, freedom-loving people — one thinks of their depiction in classics such as The Hunchback of Notre-Dame, Carmen and La Gitanilla. Van Gogh also sentimentally portrayed them as the wondering people of Europe. 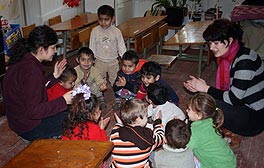 Our trip, from January 27 through February 2, began in Budapest, the capital of Hungary.  Here we met with several people working for the Hungarian Reformed Church. One of these, the Reverend Eszter Dani, is now an associate pastor in the city but who had worked in Carpath-Ukraine for several years earlier in the decade. She explained that the Hungarian church continues to be involved with outreach to the Roma in Carpath-Ukraine. Her own work there, as a trainer of lay leadership, was highly effective. When she returned to Budapest to take up parish work, her church agreed that she could travel to the Ukraine several times a year to continue her training project. This, however, has not worked out. We also met with the Reverend Odor Balazs, the recently installed head of the ecumenical office of the Hungarian Reformed Church. Being very new, he had little to contribute, but he did affirm the church’s ongoing interest in reaching out to the Roma. Finally, we met with several people who were or had been involved with the PC(USA)’s Young Adult Volunteer (YAV) program, which collaborated with a European program called “Roma-Gadje Dialogue through Service.”  The PC(USA) ended this collaboration in 2008 due to administrative difficulties in Hungary and the Ukraine.  Nevertheless, there seemed to be new energy around reviving the program; also, European churches have continued to send their own young adult volunteers, several of whom spoke highly of their programs to us.

The work among the Roma, we learned, is difficult for a number of reasons. First, Christians in Hungary and in the Reformed Church in particular have to combat age-old prejudices against the Roma. Hungarians have numerous problems of their own; hence, work with the Roma can be seen as being of tertiary concern. Second, the Carpath section of the Ukraine was traditionally part of Hungry, but during Soviet times it was made a part of the Ukraine. This is an unnatural division not only because an important minority of the people there traditionally speak Hungarian, but because the Carpath Mountains pose a geographical division that separates and isolates this region from the rest of the Ukraine.  Third, the government of the Ukraine allows the Roma schools to teach in the Roma language for the first four years, but beginning in the fifth grade all instruction must be in Ukrainian. Consequently, most Roma tend to drop out of school after the fourth grade. Lastly, the Roma, who tend to take on the religion of their host countries while retaining much of their traditional beliefs, are here loosely associated with several traditions: Orthodox, Reformed, Charismatic and Pentecostal. Since many have syncretized Christian ideas with traditional beliefs, the Roma may be highly resistant to a more biblical Christianity. 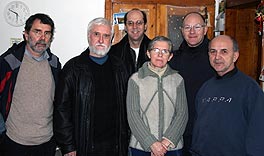 We took a train from Budapest to a station near the border where we were met by a Hungarian Ukrainian missionary, Attila Tomes, working in the Roma Mission Center in Carpath.  He drove us across the border and into the small town of Beregszasz, where we stayed in a guest house of the Transcarpathian Reformed Church.  The next day we were driven to several Roma towns in the region: Gat, Nagy Dobron and Komoroz.  The towns were small, run down and generally poor. We visited several schools, a couple of churches and Attila’s Roma Mission Center. The teachers, church workers and pastors we met were entirely sanguine and excited about the work they were doing. We were all particularly impressed with a Hungarian woman named Gizi Kupas, or Gizineni (Aunt Gisela). She invited us into her home, treated us to popcorn and talked movingly about the needs of the Roma.  We learned that it was she who had had the original vision to take the Gospel to the Roma people of Carpath-Ukraine.

There were a number of ministry possibilities that presented themselves on this trip. 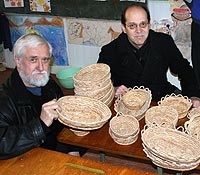 Joe Angi and Mike Parker. We are examining some Roma baskets in a small church in Carpath-Ukraine. Photo by IE staff

Perhaps the most startling thing I noticed on this trip was the difference of ambiance upon crossing the border from Hungary to Ukraine. Though only a few hundred yards, one passes from a modern European state into what was once the Soviet Union — and a forgotten and isolated part at that. At the very doorstep of prosperous Europe sits the developing world, and within this challenging region we encountered the Roma, a people doubly marginalized. Numerous adjectives come to mind: overlooked, isolated, neglected, forgotten. Surely this poor and generally uneducated population needs the special concern and outreach that the PC(USA) is capable of providing.