Krasnoyarsk lies on the Yenisei River and is roughly at the center of Siberia. It is also the administrative center of the Krasnoyarsk Krai jurisdiction (what we might style a province), which is a huge swath of territory that stretches from near the Mongolian border north into the Arctic Circle. Lying approximately between the 50th and 80th lines of latitude, it parallels Canada. A cold region, in January it averages minus four degrees Fahrenheit and in July about 64 degrees. It is Siberia’s third largest city with a population of about 909,000. The population is predominately Russian but a number of other groups are also represented: Ukrainians, Tatars, Germans, Belarusians, Tajiks and Uzbeks among others. Its name derives from the Old Russian kyzyl yar, which means red ore, a reference to the iron ore prominent in the area.

Krasnoyarsk dates from around the middle of the 18th century when it was a stop along the Moscow post road. In the late 19th century it became a junction on the Trans-Siberian Railway and an industrial center.  During Czarist times it was a place to which political exiles were banished, and during the Stalinist era it became not only the administrative center of Krasnoyarski Krai but also an important center of the Gulag system. Today, it is an industrial city as well as a center of education, having at least five major universities and academies. The city is a mixture of traditional Russian wooden structures, dreary Soviet-era buildings and modern constructions. There is a modern downtown, with comfortable hotels, restaurants and squares with fountains and ice sculptures. The Yemelyanovo Airport lies just outside Krasnoyarsk. Perhaps the most important indication that the city has entered a new era is that in 2010 direct flights will be available to it from Quebec.

Krasnoyarsk seems to be a good place from which to expand evangelism projects into greater Siberia. There are several likely projects and possibilities that we might purpose. These are explored below.

In Moscow we met Petr Romme, a Russian Baptist of German ethnicity who has a focus on the Roma in Siberia. He notes that there are now as many as 42 groups of Roma spread all over Western Europe as far east as the Ural Mountains.  There tend to be small groups among them that are interested in the church, and sometimes they are associated with a pastor. Kursk and Michurinsk are the two Russian cities where Roma work is centered, and Kursk has the one Roma Church. Petr regularly visits these various groups, and they often plan evangelization efforts. He says that there are three church denominations currently interested in this work: Pentecostal, Charismatic and Baptist. Petr’s groups have a number of felt needs:

In Krasnoyarsk we visited with Tim Loomans, who is engaged with Gospel Recordings. This group records Bible stories for purposes of evangelism among the 32 to 45 language groups in Siberia (there are only five major language groups in the region). He and his team visit a village, find local speakers to participate, and then translate and record a number of telling stories from the Bible. The recordings, which include culturally appropriate music and testimonials, are then placed on CDs and DVDs. In a program called “Every Nation,” evangelism groups that have received three months of training then travel to the villages to do church planting among native groups. To date, Gospel Recordings has produced CDs for seven people groups. The most recent production was for 10,000 copies. Since these are largely oral cultures, having the Bible stories recorded in their own languages helps to bring the biblical narratives alive.

A Siberian evangelist, Igor (pronounced eager) lives in Ulan Ude, a city about a thousand miles east of Krasnoyarsk and just north of Mongolia. He took a 29-hour train trip to be with us and to meet with Tim Loomans. Igor explained that he has a background in the occult, his mother having been a witch who passed on demons to her son in the womb. As a young man he took up a job as a village folk healer. He says that the demons in him would negotiate with the demons oppressing a client; the result was some form of temporary relief from whatever the problem might have been. Igor as a young man encountered the gospel message, which he embraced. The result was that he was delivered from the demons who lived in his body, and he felt for the first time in his life a freshness and purity that was as wonderful as the dawning day. Igor took up the work of an evangelist, specializing in reaching out to people dealing with the same occult forces that had dominated his life. In his ministry he has experienced supernatural visions and healings. He is currently working with the Buryat people, sharing the Gospel, distributing Bible recordings produced by Gospel Recordings, training others and organizing fellowship groups. The Office of International Evangelism supported his ministry last year with a grant of $2,000 from the Siberia Unreached Peoples ECO. 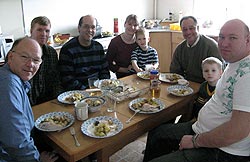 We met with the director of the Central Baptist Church for the Krasnoyarsk Krai jurisdiction. During the Soviet era the Baptists were hard-pressed and content merely to survive. Since 1991 they have moved beyond this to become a church actively engaged in outreach. In the recent past the church was supported by SEND, but the organization withdrew its support. This has had a detrimental effect on CBC’s outreach. Nevertheless, the main church in Krasnoyarsk includes a Bible school, which provides classes in missiology. When asked specifically what the PC(USA) might do to help, we were told that providing a lecturer in either the Old Testament or missiology would be most appreciated. This would aid the church in developing the trained leadership necessary not only for the existing church but for outreach to the surrounding area.

Listening to the church director speak, our group was impressed with the outreach ministry we were told about. The Baptist Church is regularly sending out mission groups to evangelize the villages of Siberia and, more recently, Mongolia. The Baptists, however, are largely Russians while the Siberians are a polyglot and multi-tribal people. The director also admitted that the Baptists had not been very successful in their missionary efforts. We concluded that this was probably because of superficial techniques and an unwillingness to allow the Siberian peoples to adapt the Gospel to their cultures. The lack of contextualization, it seemed to us, was probably the crucial failing. The PC(USA) might help here by sending a missiologist to teach in the Bible School. However, limited to this, it is unlikely that such a co-worker would make much difference. To succeed, the missionary must be a part of the ongoing effort to evangelize the Siberians. Hence a compelling long-term strategy would include, first, developing a trusting relationship between ourselves and the Baptists and, second, sending a co-worker to teach missiology and participate with the Baptist’s outreach teams. Such a person would be based in Krasnoyarsk but spend much time in the villages of Siberia.

Though our time in Krasnoyarsk was short, our team felt very good about the experience. The people we met with were hopeful and committed. Moreover, we saw clear indications that God’s Spirit is at work among the many peoples of Siberia. Though long neglected, perhaps it is now their time to hear and respond to the Gospel message. The Presbyterian Church (U.S.A.), by supporting promising local efforts, may be instrumental in accomplishing God’s plan for Siberia.