Movement for Justice in El Barrio

During Lent we shared our struggle for dignified housing and against displacement with the Second Presbyterian Church in Manhattan. We reached out to Pastor Leslie Merlin who was very happy to have us share a Minute for Mission and provide us with the opportunity to give thanks to her congregation, to the Presbyterian Church in general and to Self-Development of People.

Diana Vega has been a member of Movement since she was 15 years old and has played an active role in her Building Committee as well as on neighborhood-wide campaigns for housing and gender justice. During her years at Movement, Diana has participated in leadership development workshops, preparing her for the many roles she and other leaders play including media spokeswoman, and the many activities they carry out including outreach, negotiation, and strategy development, among others.

Diana is a prime example of the active role that girls and young women are playing in our organization. The many girls who are motivated when they see Diana - someone who looks like them, speaks their language, and is close to their age - become active members, leading the organization to continue some and begin other initiatives directly aimed at this constituency with their own needs and ways to lead the struggle for housing justice.

At Second Presbyterian Church in Manhattan on Sunday, March 20th Diana shared that Movement for Justice in El Barrio is an organization composed by immigrants, mostly by women, hard working women that struggle and fight for dignified housing and that these women have to fight against landlords and the local government who want to displace them along with their families out of their houses. Landlords want to illegally push out low-income tenants like Diana and her mother and sisters to bring in tenants who will pay double and triple the rents. Diana explained that her mother joined together with her neighbors 11 years ago and defended their home and that she, Diana is still with the organization fighting for dignified housing and for people's rights. 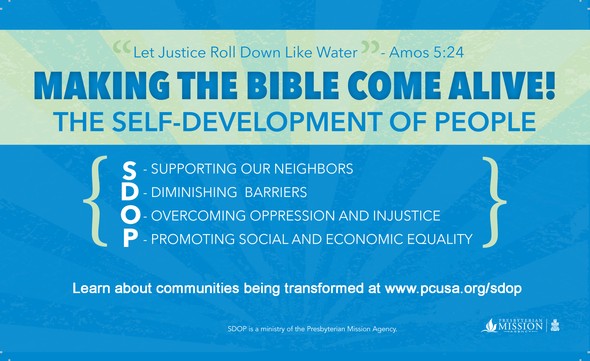 Donate to
Self-Development of People (SDOP)

Resources for
Self-Development of People (SDOP)

News for
Self-Development of People (SDOP)