Presbyterians and Politics: Disturbers of Governments 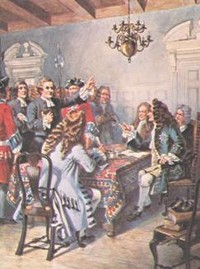 Francis Makemie, considered the father of the American Presbyterian church, preached in New York in 1707 without an official license to do so. Edward Hyde, third Earl of Clarendon, also known as Lord Cornbury, governor of New York, had him arrested and imprisoned for two months. Cornbury wrote that Makemie was a “preacher, a doctor of physic, a merchant, an attorney . . . and . . . worst of all, a disturber of governments.”1

It has been said that so many Presbyterians followed Makemie’s role with the government that King George described the Revolutionary War as the “Presbyterian War.”

It should come as no surprise that Presbyterians have a long history of engagement with the secular political order. In fact, well before Makemie, John Calvin understood the need for the role of civil authority. Calvin was opposed to any argument that tried to say that Christian liberty meant the absence of civil government. In addition, the Westminster Confession of Faith states:

And because the powers which God hath ordained, and the liberty which Christ hath purchased, are not intended by God to destroy, but mutually to uphold and preserve one another; they who, upon pretense of Christian liberty, shall oppose any lawful power, or the lawful exercise of it, whether it be civil or ecclesiastical, resist the ordinance of God. (The Book of Confessions, 6.111)

At the first General Assembly in 1789, commissioners continued this engagement with the government by approving a letter to President Washington that expressed their delight at his appointment to the “first office in the nation.”

So, on one hand, it would appear that those of the Reformed tradition have been defenders of the role of government, and on the other hand, disturbers of governments.

Presbyterians have argued with the government about many issues, such as slavery, education, temperance, labor conditions, segregation, war, and the environment. At times, the General Assembly has spoken for the vast majority of the church, and at other times, the assembly has spoken a prophetic word to itself and the world.

In 1966, the Presbyterian Church in the United States (PCUS) approved a short, well-written document titled “The Theological Basis for Christian Social Action.” The paper succinctly makes the case for the church’s role as a disturber of governments. Here are a few gems from the document for our consideration:

To disturb governments, to speak truth to power, and to engage in the political context of the age have been seen within the Reformed tradition as an understanding of what it means to bear witness to the gospel. It is also how we in the Reformed tradition understand vocation: We—ministers, teachers, nurses, plumbers, all of us—serve God in and through our vocation and are called to a ministry of witness wherever we are.

By Gradye Parsons, stated clerk of the Presbyterian Church (U.S.A.).