Persevering to learn the nuances of language and culture, navigating through political waters, overcoming economic setbacks,… Presbyterians’ commitment to God’s mission in Egypt has been both steadfast and adaptive. By the grace of God, the results have been deeply rich. A few books have been written in an attempt to describe God’s activity through the Presbyterian mission in Egypt (see the reading list below).  What follows is an abbreviated summary of Presbyterian involvement in God’s on-going work in the ancient-yet-modern land of Egypt.

The church and the Arab Awakening

Compelled to share the love and truth of Christ in relevant ways, the mission efforts of the Presbyterians became known for their innovation in animal husbandry, literacy, community development, and audio-visuals.  In time, all this work (as well as the educational, medical, and church work) was entrusted to the Egyptian Presbyterians.  God greatly blessed this work to the point that, in 1989, author Norman Horner wrote that the Evangelical Presbyterian Church of Egypt (Synod of the Nile) was “by far the largest Protestant church in Egypt and in many respects the strongest Protestant denomination in the Middle East.”[1] 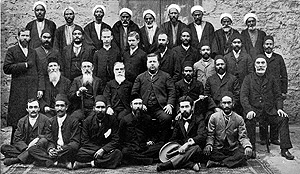 In Egypt, as in many other places in the world, Presbyterian mission personnel utilized education as a way to demonstrate the love and truth of Jesus Christ.  Dozens of primary and secondary schools were established throughout Egypt, educating both girls and boys.  The mission personnel were particularly pioneering in the education of girls, as clearly seen in the on-going work of the prestigious Ramses College for Girls (formerly “American College for Girls”) and several other schools.  Post-secondary schools were also established—the American University in Cairo and Assiut College (though the AUC and Assiut College are no longer under Presbyterian supervision).  The various schools of the Synod of the Nile have educated thousands of young minds over the last century and beyond.  The Synod of the Nile aims to provide a top-notch education at its schools while also “building up” persons “capable of positive and effective participation in the society locally and internationally.”[3]

Aware of the need to train leadership within the church, the first Presbyterian mission personnel moved quickly to establish the Evangelical Theological Seminary in Cairo (ETSC).  The first classes were held on a houseboat on the Nile River.  The Egyptian Presbyterian churches raised money to further this work, and in 1926 they purchased land and erected buildings for a permanent home for the seminary.  Today ETSC trains church leaders not only for ministry in Egypt but throughout the Arab world.

Through schools, a camp and conference center (Beit El Salaam, “House of Peace”), publishing houses, and various other partner organizations, education has been at the forefront of the PC(USA)’s ministry in Egypt all along the way.  In God’s grace, these educational ministries have helped fashion minds and hearts that, through the power of the Holy Spirit, seek to honor Jesus’s teaching to love God and love others. 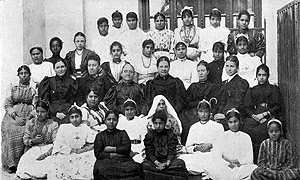 Viewing Jesus Christ as himself a “medical missionary,” the early Presbyterian mission personnel in Egypt sought to bring glory to God by healing the sick.  Eventually two hospitals were established—one in Assiut and one in Tanta.  The hospitals became “pioneers and models of healing service for all of Egypt,”[4] serving as a catalyst for the expansion of government hospitals and medical services throughout Egypt.  For a variety of reasons the Assiut Hospital was sold to the government for a nominal sum in the late 1960’s.  But the American Mission Hospital in Tanta, under the supervision of the Synod of the Nile, continues to extend Christ’s ministry of healing to the people of the Nile delta.

Through the work of CEOSS, American Mission Hospital, and countless other mercy ministries of local churches and partner organizations in Egypt, the PC(USA) and the Synod of the Nile have been able to lavish God’s love on the people of Egypt.  There is simply no way to account for the ways these acts of mercy have changed lives, shaped society, and brought glory to God in Egypt.

Well aware that they were in the heartland of ancient churches that traced their origins back to the Apostolic Era, the first American Presbyterian mission personnel aimed, “Not to tear down the old churches or build up a sect, but to make known and inculcate the great fundamental truths of the gospel.”[6] They sought to bring fresh strength to the Egyptian Christians, most of whom were Coptic Orthodox.  The hope was to help empower the Coptic Christians to reach out in love to their neighbors.  Although the Presbyterians’ relationship with the Coptic Orthodox Church experienced much turmoil initially, in recent decades great strides have been made to build a relationship of mutual respect and understanding.  The Coptic Church (with around 9 million members) dwarfs the Synod of the Nile (with around 500,000 members).  But in spite of their differences in size, history and approach, the two churches, as well as many other Christians churches in Egypt, are working together to serve Christ in their native land.

John Hogg—one of the first Presbyterian mission personnel in Egypt sent by he Church of Scotland, this dynamic Scotsman is remembered for his pioneering work in education, leadership development, evangelism, and church-planting.

Ewing M. Bailey—an early pioneer in audiovisuals, Bailey developed the Christian Center for Audio-Visual Services.  The Center lent filmstrips, reel recordings, projectors and other equipment to hundreds of various congregations (Protestant, Orthodox, and Catholic).  These resources enabled churches to tell God’s story to their neighbors in a fresh and more appealing format.[8] 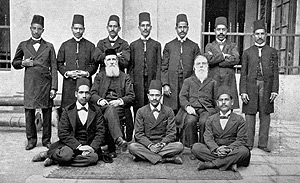 Samuel Habib—an Egyptian Christian leader, author, and professor, the Rev. Habib was the founder of CEOSS (the Coptic Evangelical Organization for Social Services), the President of the Protestant Churches in Egypt, and a dynamic leader.  Habib received local and international recognition for his faithful, forward-thinking leadership.

John Lorimer—in response to a need articulated by the Egyptian Christians, this American man wrote a five-volume Arabic-language “History of Christianity.”  This work, which has directly benefited seminary students in Egypt, highlights the historical and theological issues of particular interest to Middle Eastern Christians, both Orthodox and Protestant.[9]

Dr. Helen T. Martin—the principal of the American School for Girls (now Ramses College) from 1923-1956, Dr. Martin was looked to as the leading educator for the entire Presbyterian mission throughout much the 20th Century.

Martha Roy—an American born in Egypt, Roy served in Egypt as a teacher and administrator.  Martha is best remembered for her work with the liturgy of the Coptic Orthodox Church—a work that served to greatly improve relations between Coptic and Presbyterian Christians in Egypt, and a work for which she received numerous honors.

Kenneth Bailey – this American educator and author focused his attention on understanding the Near Eastern cultural background of the New Testament.  Bailey’s writings (Jesus Through Middle Eastern Eyes, The Cross and The Prodigal, Poet and Peasant Through Peasant Eyes, and a number of other books and publications) have informed and inspired readers all over the world.  Bailey’s influence both at the Evangelical Theological Seminary in Cairo and the Near East School of Theology in Beirut (Lebanon) have helped Middle Eastern Christians connect with their own, rich Christian heritage.

Books on Presbyterians in Egypt:

The Presbyterian Experience in Egypt: 1950-2000, by Jack Lorimer

Vindicating a Vision: The Story of the American Mission in Egypt,  1854-1954, by Earl Elder

Masterbuilder on the Nile: Being a Record of the Life and Aims of John  Hogg, byRena Hogg

American Evangelicals in Egypt: Missionary Encounters in an Age of Empire. By Heather J. Sharkey, 2008.