Presbyterian Women’s triennial Churchwide Gathering includes a Business Meeting. It is at this meeting that voting representatives decide the focus, budget and leadership for the upcoming triennium. The 2015 Business Meeting was held on June 17 and 18.

Legacies and leaders, budgets and bylaws 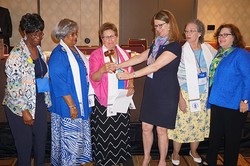 Presbyterian Women in the PC(USA), Inc. has a new slate of moderators and representatives, elected on the second day of the Business Meeting—a day of jubilation and sadness.

In the evening of Wednesday, June 17, the 2015 Business Meeting began with a prayer: “May the God of freedom, hope, compassion and strength fill us, and may we stand on a foundation of hope, made possible by the transforming power of the Holy Spirit.”

With great joy, Rhashell Hunter, director of Racial Ethnic and Women’s Ministries brought greetings from the PC(USA). Sporting the Honorary Life Membership pin she was surprised with at the most recent General Assembly Mission Council meeting (“They pulled one over on me!”), she said she was very honored and humbled to receive it. “PW is an organization near and dear to my heart. I think of the many women serving the church in a humble way, with hearts of love.” Read more.