Presbyterians have helped shape the world through mission work for more than 175 years. Over those nearly two centuries, Presbyterians have borne faithful witness to the gospel around the world by planting churches, building hospitals, and starting schools on every continent.

It was precisely this rich legacy of mission that Lance Loveall counted on when he was called as pastor of the 261-member First Presbyterian Church of Kenosha, Wisconsin, in May 2001. 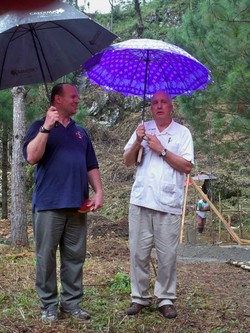 “When I first came here, one of the goals in the church’s mission statement was ‘to establish personal relationships with missionaries,’” says Lance. “That was an easy goal to kick off. I just went straight to the office of World Mission and got a list of the missionaries and what they were doing. Then I helped the church to choose a mission coworker we could support in the field of education, which has always been a part of the ethos of who we are as a congregation.”

By partnering with World Mission, First Church connected with—and since 2002 has generously supported—PC(USA) mission coworker Nadia Ayoub, first in her educational ministry in Central Asia and, since 2010, in her work with the Roma people in Ukraine.

“Nadia was always very responsive whenever we reached out to her,” Lance says. “In fact, once when we simply asked her if there was anything else our church could be doing for her, she said, ‘Yes, you can start a school.’ So we made that commitment. Like it says in Scripture, ‘You have been faithful with a few things; I will put you in charge of many things.’”

“Some people think they can do mission better than the denomination, but I would say in terms of mission, one of the real benefits of being Presbyterian is that we get to partner and don’t have to go out and do it alone,” Lance says. “We’re a midsize congregation, but even if we were a big church with all of the resources we wanted, I’d still partner with the Presbyterian Mission Agency, because there are a lot of things you can’t think of, like how to handle emergencies or what do to if an area becomes unstable. I’ve been in enough contact now with World Mission and the coworkers to know that no congregation on its own could do all that they do.”

Two years ago—even as the congregation continued its support of Nadia Ayoub—Lance turned again to World Mission, this time to find a short-term mission experience for the church’s youth. Having selected Guatemala as a safe and stable destination, Lance found [former mission coworker] Philip Beisswenger’s information on the PC(USA) website and basically cold-called him.

“‘Do you have a place for us?’” Lance recalls asking Philip. “Providentially, Philip was setting up a youth 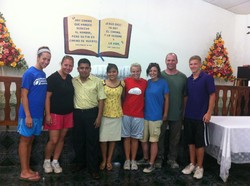 mission trip to Retalhuleu [Guatemala] with three or four other congregations, so we just joined in. It all went so smoothly, we knew we would do it again.”

The church’s second trip to Guatemala, to the city of Cobán, has evolved into a lasting partnership with the Guatemalan Presbyterian Church to build a school, a theological training center, and a church. It also introduced First Church to mission coworkers Richard and Debbie Welch.

“Little did I know when I went to Cobán that I would be representing the PC(USA) during the groundbreaking celebration, even though no one officially appointed me,” says Lance. “It was one of the most significant moments of my ministry.”

Most recently, the church has reached out to yet another continent, Africa, where they are sending mission dollars to help subsidize Bibles for the people of Congo. “It’s cool to get involved in other parts of the world,” Lance says. “And it’s not just enough to send money; we want to know about the people.”

As First Church continues to seek out further international mission partnerships, Lance says that his default mode is to turn to Presbyterian Mission.

“I trust it, we’ve seen it, we have a long history of it, we’re Presbyterian,” he says. “We’re going to support Presbyterian Mission. We’re not opposed to other missions—if there’s a good thing we can support that Presbyterians don’t do, we’re open to consider[ing] it, look[ing] at it, put[ting] money toward it—but if we’re going to go out and find something, it’s going to be a Presbyterian thing.”

Learn about the Educate a Child initiative.