Our call toward cultural proficiency

Supporting the development of a climate for change 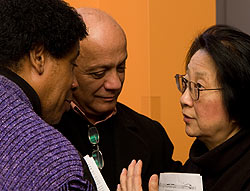 As people of faith we are called into relationship with God and with one another. We promote God’s reign on earth by attending to the spiritual, systemic, and social concerns of humanity and by remaining mindful of God’s guidance in all matters. As we seek to be more like Christ in our interactions with each other, the challenge is to courageously enter those places of brokenness that maintain privilege for some and inequity for others.

The report suggested cultural proficiency as one approach in effectively engaging and addressing the emerging issues of diversity. Since the fall of 2005, the Office for Cultural Proficiency has worked collaboratively with various PC(USA) national ministry areas, advisory and advocacy committees, presbyteries, and local churches in the development of a culturally proficient lens to respond holistically and proactively across the dimensions of diversity within the Presbyterian Church (U.S.A.).

This includes but is not limited to race, ethnicity, gender, physical/mental ability, sexual orientation, region, clergy, lay and economic status.

Cultural Proficiency is an approach that provides tools for individual and organizational transformation and as such supports the development of a climate for change within the Presbyterian Church (U.S.A.).

On being a good neigbor

As the planning committee for the national staff Presbyterian Church (U.S.A.) 2010 Martin Luther King Jr. observations contemplated the theme for this year’s justice walk, we could not imagine how relevant the final theme choice would be for events yet to come. Serving as the theme of the 2010 justice walk, “On Being a Good Neighbor” is the title of a speech the Reverend Dr. Martin Luther King Jr. delivered during the Montgomery Bus Boycott in 1956. It is within this speech Dr. King asserts that the ultimate measure of a man [woman] is not where he [she] stands in moments of comfort and convenience, but where he [she] stands at times of challenge and controversy. Learn more →

Our call in action

Cultural Proficiency teaches us to be aware of how individual and organizational cultural attitudes, behaviors, practices and policies affect us and others. The January 2009 Reverend Dr. Martin Luther King Jr. holiday observation provided an opportunity for the Presbyterian Church (U.S.A.) and the Louisville, Ky., community to connect around issues of diversity, social justice and social change. Individuals and groups participated in a “Justice Walk” that lifted the work of the Reverend Dr. Martin Luther King Jr., Louisville community activists and the social justice mission of the PC(USA).

The event was shaped as a continuing worship service that began in the atrium of the Presbyterian Church (U.S.A.) national office and progressed to Louisville historical markers, where there were prayers of confession, reflections and mediations concerning past and present social justice issues, such as poverty, unemployment, immigration and human trafficking. The theme for the walk was “Closer to the Dream: Faithful Steps for Justice.” The service concluded at the Presbyterian Community Center with an assurance of pardon, a scripture reflection and a hymn. Read an excerpt from the Justice Walk service. 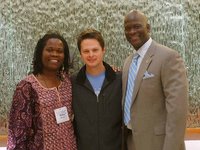 The Ecumenical Justice Partners Network (EJPN) represents a collective of individuals working on behalf of denominations and other faith-based groups and organizations at the national level on issues of social justice, antiracism, diversity, inclusion and cultural proficiency. The network members share resource materials, collaboratively sponsor or participate in informational, educational and training events, and serve as a support to each other. The EJPN 2009 spring meeting was held in conjunction with the 10th annual White Privilege Conference in Memphis, Tennessee, providing an opportunity to connect with others across the country and work on international issues of social justice.

This year’s theme was “Conversations and Tools to Narrow the Nation’s Achievement and Opportunity Gaps” and featured Terry L. Cross (founder of the National Indian Child Welfare Association, co-author of “Toward a Culturally Competent System of Care” and founder of the cultural proficiency movement) and Terrence Roberts (one of the Little Rock Nine and civil rights activist). This was the second year that the Presbyterian Church (U.S.A.) participated in the Institute’s “Voices From the Field” segment with a presentation by national staff person Sara Todd.