Do you eat? Then Help End Farmworker Exploitation!

Get background and resources on the PC(USA)’s involvement in the Campaign for Fair Food.

As people of faith, we have a responsibility to help right wrongs—to halt injustices and improve circumstances for others. This opportunity was made easy for me when I got an internship last summer with the Student/Farmworker Alliance, working hand-in-hand with the Coalition of Immokalee Workers (CIW) at their shared office in Immokalee, Florida.

The CIW is a farmworker organization, supported by the Presbyterian Hunger Program, that took the initiative to regain their own rights in Florida’s tomato fields. Injustices have been rampant for years, including sub-poverty wages, no overtime, risk of firing for reporting abuses, no right to organize, and in extreme cases, modern-slavery.  But a new day is dawning. The CIW’s Campaign for Fair Food is changing this as consumers join with farmworkers to convince corporations who buy tomatoes to support higher standards. 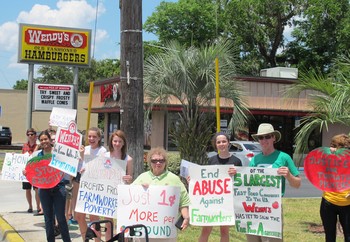 The Campaign for Fair Food was initiated in April 2001 when the CIW called for a nation-wide consumer boycott of Taco Bell restaurants and products.   Presbyterians and other people of faith had long offered food and clothing to the farmworkers in Immokalee, FL.  Through this experience people of faith were led to ask “why is it that farmworkers work 10-12 hours a day, sometimes 7 days a week and still cannot support their own families?”  It was this fundamental question of human dignity that prompted the Presbytery of Tampa Bay to overture the 214th General Assembly in support of the Taco Bell boycott. After prayer and study, the General Assembly voted affirmatively to support the boycott in June 2002.  Over the next three years Presbyterians joined other people of faith in observing the boycott, writing letters, engaging in public protest, and supporting the CIW on “truth tours” where workers traveled cross-country to educate consumers about the exploitative conditions that lay behind the food we consume.  Through the work of the Presbyterian Hunger Program,  PC(USA) played a unique role in convening talks between the CIW and Yum! Brands which helped lead to the farmworkers’ historic agreement with Yum! Brands/Taco Bell in 2005.  In June of 2006, the 217th General Assembly passed a resolution affirming the church’s ongoing work with the CIW and the Campaign for Fair Food in light of the confessional heritage of the PC(USA).  PHP has continued to foster meaningful Presbyterian engagement in the Campaign across the nation.

I first heard about the CIW when my church, Park Lake Presbyterian Church of Orlando, Florida, visited Immokalee during a middle school mission trip. I remember being intrigued by the old protest signs in the corner of the CIW office. I saw the golden arches of a dusty McDonald’s sign, with the mock slogan: ‘I’m hatin’ it.’ I knew then that this organization was not your traditional nonprofit.

Today, eleven corporations, such as McDonald’s, Subway, and Trader Joe’s are working with the CIW through the Fair Food Program, paying a penny more per pound of tomatoes to improve farmworker wages and purchasing only from growers who uphold “a strict code of conduct, a cooperative complaint resolution system, a participatory health and safety program, and a worker-to-worker education process[1]”

My church introduced me to the CIW, but I truly got involved during my time at Boone High School. I became involved in Boone’s Social Justice Club and helped focus the club’s energy on CIW issues. We started participating in Publix Supermarket protest actions whenever the CIW came to town, as well as the times in between.

My internship with the Student/Farmworker Alliance proved to be an invaluable experience. Internships in general open up so many doors, but getting involved in a nonprofit feels especially gratifying. I believe there is something to be said about working with people who are truly there to help others, and who are there for that reason alone. They are a humbling crowd.

I invite my fellow youth to not only get involved with such an organization, but to start specifically by participating in the Campaign for Fair Food. The most recently launched campaign is Wendy’s. The Rev. Gradye Parsons, Stated Clerk of the General Assembly, wrote a letter to Emil Brolick, President of Wendy's, urging the company to join the Fair Food Program. With each new corporation that signs on, the successes already achieved are more securely locked in place. With each corporation that delays joining; past achievements are put in jeopardy. Nothing is permanent until everyone decides to make it permanent.

We all eat, and it is our duty to show gratitude for that blessing by ensuring the human rights and dignity of the people who help put that food on our tables; the farmworkers.

There are letters to be written, chants to be chanted, and protest signs to be held. We need to let the world know this is a mission worth fighting for. Change starts with you.