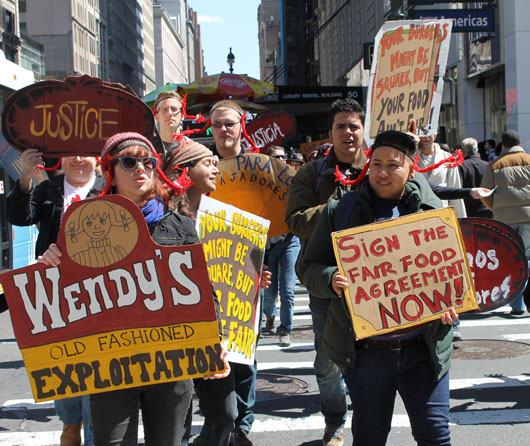 The pigtail march outside a Wendy’s in NYC, April 2013. Photo: CIW

1) To pay at least 1 penny more per pound of tomatoes to the growers who supply them.  Those growers then pass that increase onto workers.  The increase is audited by the Fair Food Standards Council, a third party monitor, to ensure the increase gets to farmworkers.

2) purchase their Florida tomatoes only from growers participating in the Fair Food Program and upholding the fair food code of conduct and suspending purchases from those growers found to be in violation of the Code until they correct such violations.

How has Wendy’s responded?

Further, beginning at its Annual Meeting in May 2013, Wendy’s executives and spokepersons have deliberately mischaracterized the Fair Food Program and also claimed they are pay a penny per pound more…of course they may be paying a penny more but it’s not going to farmworkers’ wages and its not monitored by the Fair Food Standards Council.

Read about Wendy’s statements and CIW’s responses.  Scroll down on the linked page.

What can I do?

How has the PC(USA) been involved?

The PC(USA) has been a partner in the Campaign for Fair Food since 2002 and played a significant role at the local, regional and national settings in convincing major food corporations to recognize their power to change conditions and urging them to partner with the Coalition of Immokalee Workers through the Fair Food Program.  The church has done this work in concert with ecumenical and interfaith partners.

April 2013, The Rev. Gradye Parsons, Stated Clerk of the General Assembly, sent a letter to Mr. Emil Brolick , CEO of Wendy’s, recalling that Mr. Brolick was President of Taco Bell when Yum! Brands signed the first fair food agreement with the CIW and urging him to “sit down with the Coalition of Immokalee Workers without delay and discuss how Wendy’s can become a part of the Fair Food Program.  Your leadership is needed now more than ever.”  Read the full letter.