The 219th General Assembly (2010) of the Presbyterian Church (U.S.A.) called on the US government to “pursue non-combat actions that will support stability, prosperity, and peace in Afghanistan, … cooperate with the United Nations in providing and overseeing greatly expanded aid to Afghanistan for the delivery of humanitarian and economic development assistance, … [and] engage directly with and among the Afghani people in a process of peacemaking…” 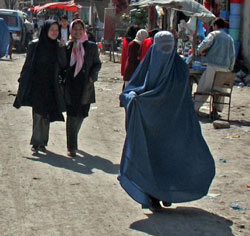 Afghanistan is one of the most dangerous places in the world to be a woman.

Mountainous and landlocked, Afghanistan has a long history of instability and conflict. Yet, prior to the Soviet invasion of Afghanistan in 1979, Afghan cities and cultural institutions enjoyed their modern golden age, making significant progress toward modernization. During the decade-long Soviet invasion, various anti-Soviet Mujahedeen groups formed, with backing from the United States and others, and succeeded in ousting Soviet troops in 1989. Subsequently, a vacuum of power led to a brutal civil war between the various Mujahedeen groups. In 1996, a new Islamist extremist group known as the Taliban swept in from neighboring Pakistan and conquered the capital city Kabul, and ruled most of the country. Following the September 11, 2001 terrorist attacks on the U.S. and the refusal of the Taliban to cooperate with U.S. efforts to capture the perpetrators, the U.S. invaded Afghanistan in October 2001 and ended Taliban dominance.

Today, after more than three decades of continuous war and conflict, Afghanistan is one of the most impoverished countries in the world, and among the least developed.  Its economy, infrastructure, and civil society are in ruins. Countless national treasures have been destroyed. A majority of the Afghan people find themselves vulnerable to various forms of violence and extremism, and many have become refugees. Poverty, inaccessibility to healthcare, cultural prejudice, as well as gender-based violence make Afghanistan one of the most dangerous places in the world to be a woman. 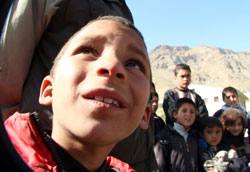 Afghan children waiting to see a doctor at a community center near Kabul. Photo by PFF.

Though reliable data on religious demography is not available, observers estimate that the vast majority of the Afghan population is Muslim, with about 80% Sunni and about 19% Shia Muslim. About 1% of the people are Buddhist, Parsi (Zoroastrian), Sikh, Hindu, and Christian. A Jewish population that numbered 5,000 in 1948 had left Afghanistan entirely by 2000. 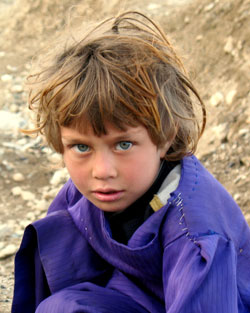 Five-year-old girl playing in the rubble near Kabul. Photo by PFF.

During the rule of the Mongol Empire (which stretched from eastern Turkey to Pakistan and covered most of Afghanistan) some rulers converted to Islam and zealously propagated the new religion. The Church of the East was almost completely eradicated across Afghanistan and Persia during the reign of Timur (1336–1405). Christianity seems to have maintained a small presence until the present.

Today, there is no means to determine the number of Afghan Christians. Christian mission organizations report that there are several hundred small underground house churches throughout Afghanistan, each consisting of less than 10 people. A 2007 report by the U.S. Department of State reports suggests that the number of Afghan Christians range from 500 to 8,000. The report also states that, despite a constitutional promise of religious tolerance, those openly Christian or converting from Islam to Christianity remain vulnerable to radical Islamist groups.