Church of the Sermon on the Mount, Ibillin

Since 1948 General Assemblies have repeatedly addressed the Middle East and particularly Israel and Palestine. The Presbyterian position has consistently been to affirm the right of Israel to exist as a sovereign state within secure, internationally recognized borders and the right of the Palestinians to self-determination, including the right to the establishment of a neighboring independent, sovereign state toward the end of establishing a just and durable peace.

Background of the conflict

A brief history adapted from Resolution on Israel and Palestine: End the Occupation Now, approved at the 215th General Assembly in 2003.

Resources for study and engagement 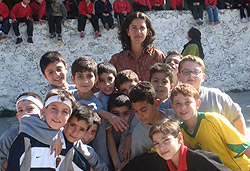 The inheritance of Abraham? A report on the ‘promised land’, The Church of Scotland, May 2013

The Presbyterian Pre-Occupation with the Occupation of Palestine—Construing and Misconstruing the “Divestment” Vote—Whitney Bodman, Unbound

Kairos Palestine: A Moment of Truth

Palestine-Israel Ecumenical Forum: Guidelines for Christians Contemplating a Pilgrimage to the Holy Land

The Ecumenical Accompaniment Programme in Palestine and Israel (EAPPI) brings internationals to the West Bank to experience life under occupation. Ecumenical Accompaniers (EAs) provide protective presence to vulnerable communities, monitor and report human rights abuses and support Palestinians and Israelis working together for peace. When they return home, EAs campaign for a just and peaceful resolution to the Israeli/Palestinian conflict through an end to the occupation, respect for international law and implementation of UN resolutions. Learn more

The Israel-Palestine Mission Network is among more than 40 networks that connect Presbyterians who share a common mission interest. Most participants are involved in mission partnerships through congregations, presbyteries or synods. Network members come together to coordinate efforts, share best practices and develop strategies.