For information concerning Presbyterians serving in Turkey, please contact the office for the Middle East and Europe at 502-569-5324. 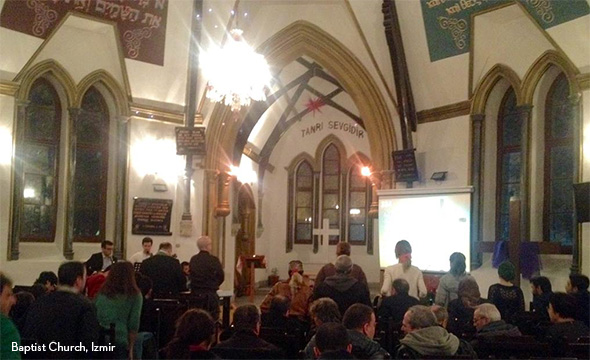 Week of Christian Unity worship services at a Baptist Church where Orthodox, Catholic, Anglicans, and Protestants worshiped together, January 2015.

The area that is now Turkey (its middle and western portions known in former times as Asia Minor or Anatolia) was a center of the Christian faith from the 1st century until the arrival of Islam at the end of the 10th Century. Even before this, Turkey was a land hosting Old Testament peoples, characters and events.  It can also claim much of the New Testament having been written to or from people or groups within its bounds, along with the events described in these writings having been played out there (see particularly the book of Acts and the Pauline epistles).  By the 4th Century Asia Minor had become the center of a Christian Empire with  Constantine I, the first Christian Roman emperor, making what became known as Constantinople (now Istanbul) the Imperial capital (330 C.E.) as the “New Rome” or “2nd Rome.” Christianity became the dominant faith of the Roman and then Byzantine Empires which controlled these lands until the arrival of Turkish tribes. Having swept west from Central Asia, Turkic peoples adopted Islam as they entered the region beginning at the end of the 11th century.  By the middle of the 15th century, the entirety of Turkey and much of Greece was in Turkish hands. In 1923, under the leadership of Mustafa Kemal Ataturk, Turkey was reborn as a secular, modern state following the collapse of the Ottoman Empire, which had dominated the Middle East for four and a half centuries.

Ethnic Turks comprise 80–85 percent of Turkey’s population. The Kurds are the largest minority group in Turkey, and there are smaller populations of Arabs, Armenians, Circassians, Lazes and Georgians.

Today a majority of Turkish citizens regard themselves as Sunni Muslims.  Perhaps 15% of the total population adheres to beliefs and practices of the Alevi sect which has connections with Bektashi-Sufi tradition, Anatolian folk culture, and a possible root in early Shia Islam.  In actuality many within the majority Sunni group practice varying forms of “folk Islam,” which consists of folk religion painted over with a veneer of Islamic language and ritual.  Along with these groups, a sizeable minority of the entire population are more secular and Western in orientation.

In recent centuries the populations of historic Christian minorities have dwindled, most notably in the past 100 years.  Until recently, Christianity had been practiced solely by ethnic Greeks, Armenians and Syrians.  Since the 1980’s, a Christian movement among ethnic Turks has emerged for the first time and is growing.  Today there are approximately 3000 known Turkish Christian believers, most of them having come to faith in Christ in recent years.  They have organized themselves into around one hundred separate churches or fellowships, ranging from east to west and gathering in historic church buildings, rented store fronts, and homes.  Given the cultural pressure against becoming a Christian, there are probably many secret believers who have not yet confessed their faith openly.

The PC(USA) supports a number of service and witness opportunities in Turkey through the work of ecumenical partners.