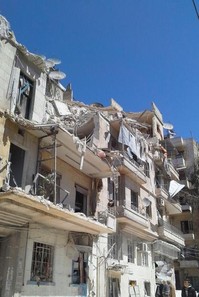 In 2015, the Christian community in Aleppo was shocked by violent attacks and the destruction caused by rocket missiles in the Suleimanie neighborhood which had been considered one of the safe areas. This caused more displacement for many families inside the city. Others made the decision to leave the country immediately, and the majority who did not have any other choices returned to live in their apartments after getting assistance for necessary renovations.

Five years of war has left every remaining Armenian family in need. The Jinishian Memorial Program in Syria has helped 6,000 people in 2015, our doors open daily with aid and encouragement.

“It's very, very difficult and more expensive than last year. Families are suffering. People are leaving their homes in dangerous war zones and obliged to rent costly apartments,” says country director Talin Topalakian. We doubled grants to help families survive in the face of sky-rocketing costs and severe shortages even of basic food supplies.

During the summer people suffered from long-lasting water cuts. Everyone, even small children and elderly women, was carrying water from wells at churches and mosques. At times even these sources were not useful for drinking, so JMP distributed drinking water to beneficiary families, particularly those with small children.

Since the fall there has been no electricity for months—no washing machine, refrigerator, heating—but neighborhood generators will light one room for $6/week.

Kessab village received farm machinery to replace those that were stolen and to re-cultivate land that was neglected during recent deportations after attacks in the area earlier in the year. Each religious community received important tools for families to share just in time for harvesting. 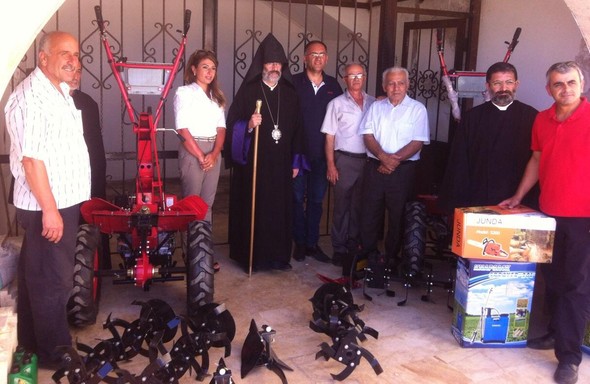 In the face of ongoing devastation in the city of Aleppo, Jinishian staff still managed to create a new debate program for teens to give them skills and a sense of purpose and possibility.

After several days of training and workshops, all the young debaters and their coaches visited the leader of the Armenian Evangelical Community in Syria, Rev. Haroutune Selimian. He spoke to them about social issues which had a direct connection to the debate topics. Then the students had the chance to interview and share ideas with the minister. Expressing their own ideas openly with a responsible, active and well-known personality in their community increased their confidence and leadership skills.

Helping women find purpose and productivity is another important value for JMP, even in wartime. Through the Creative Hands Project women learned Armenian handiwork as a source of fulfillment and income. 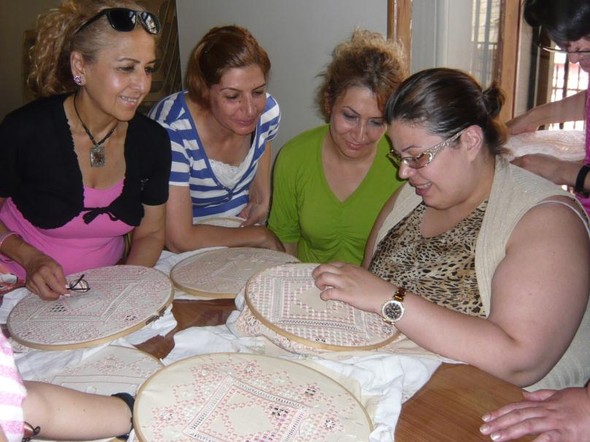 One participant said, “At the beginning I thought it will be impossible for me to learn this very difficult and detailed Marash work. I was going to quit the sessions, but by the encouragement and empowering words of JMP staff, I decided to continue and came up with three wonderful pieces of mine own hands! ...I’m very grateful, without JMP I would never have had the chance to learn such a thing.”

a spirit of hope

Children need more than just food and shelter as they weather the trauma and violence around them. In Damascus, Dr. Viken Simonian taught the kids from St. Sarkis church about wellness, and JMP site director Mrs. Yerikian led an art activity for the children to express themselves and put on paper whatever they understood. "The paintings were very impressive!" Topalakian said. "They returned home after lunch and games with coloring copybooks, pencils and dictionaries. All were very grateful to JMP for giving the children a chance just to be kids during these horrible days."

According to Topalakian, people in Syria are living with the hope of finding a solution to end the Syrian war, to end the spreading of fundamentalist groups in Syria. They look forward to days that will open a path towards a new time of rehabilitation and rebuilding, when JMP will again have an important role implementing development projects which will provide the nation the life-standard it deserves.

The courageous Jinishian team in Syria has faith that these hopes will be fulfilled through the empowerment of their leadership and supporters, and by the strength and the will of the Almighty God.

Watch a ten minute video created by the Jinishian Memorial Program in Syria.