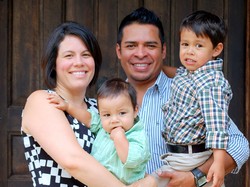 Mission co-worker in Guatemala and Mexico
Serving as Regional Liaison for Mexico and Guatemala (Amanda) and with the Presbyterian Border Region Outreach (PBRO) (Omar)
Blog: Walking with Guatemalan sisters of faith

Serving on the US-Mexico border, Amanda and Omar
are regularly available for to visit congregations or organizations. Email them to extend an invitation.

About Amanda Craft and Omar Chan's ministry
As regional liaison for Mexico and Guatemala, Amanda Craft serves as a facilitator of the Presbyterian Church (U.S.A.) providing support for partner programs, relationships, and activities and as an implementer of the Presbyterian World Mission strategy. She supports PC(USA) mission personnel by sharing information, mentoring/guiding and encouraging missiological reflection. In addition, Amanda facilitates and seeks to strengthen healthy, effective and missiologically appropriate relationships between PC(USA) congregations and presbyteries and partners in Mexico and Guatemala. As the facilitator for the Presbyterian Border Region Outreach (PBRO), Omar assists in faithful and effective mission at each of the six border ministry sites and enhances the opportunity for PC(USA) members and congregations to participate in mutual mission along the Mexico/US border addressing the three critical global issues: addressing the root causes of poverty, especially as they impact women and children, sharing the good news of God's love in Jesus Christ, engaging in reconciliation amidst cultures of violence.

Meet Amanda in a video

Regional Context
Mexico has a rich history of many ancient and powerful indigenous groups. The Aztec people were at the height of power when they were conquered by Spanish in the early 1520s.  Independence from Spain was won in 1821.  The next century was marked by war and revolution causing widespread death for the Mexican population.  Finally peace and stability came in the late 1920s.  With the stability came marked economic growth until the economic crisis in 1982, which highlighted the massive burden of foreign debt carried by underdeveloped countries worldwide.  Mexico again stabilized but was hit during the negative impact of the Free Trade Agreements (NAFTA) signed with the United States. So, Mexico has been described as a land of contrasts. Natural beauty and urban blight and poverty and affluence exist very close to each other. Yet most Mexicans have little chance of attaining an economically prosperous lifestyle. An answer to some economically, politically, and socially disenfranchised Mexicans is come to the United States in search of better opportunities. Much of the PC(USA)’s work in Mexico is along its border with the United States done through the Presbyterian Border Region Outreach (PBRO).  Guatemala is the most populous and the most industrialized country in Central America. It is also by far the country with the highest percentage of indigenous population. Most of the indigenous population descended from the Mayans, whose highly developed civilization from 300 to 900 C.E. made magnificent advancements in architecture, music, mathematics and built an extensive trade network. Since the time of Spanish conquistadores, wealth in Guatemala has been concentrated among the members of Guatemala’s elite class.  The indigenous population was forced to labor the fields for the elite class left without rights or land.  Neglect and repression of other social classes sparked the armed conflict, leaving more than 200,000 individuals dead or disappeared.  The 36-year armed conflict officially ended in 1996 with the signing of the peace accords. However, the disparities continue. Those in marginalized communities, the majority of whom are indigenous, remain politically, socially, and economically disenfranchised. Mission work done on behalf of the PC(USA) in Guatemala is done in partnership with the IENPG and CEDEPCA.  Both organizations work closely with marginalized communities struggling to change the current reality.

About Amanda Craft and Omar Chan
Amanda and Omar bring to mission service a profound love for Latin America and a deep desire to serve God there. Amanda, a native of western Pennsylvania, first lived in Guatemala as a Young Adult Volunteer from 1999 to 2000. She returned as a mission co-worker in 2009 to serve in the area of women’s leadership development with the National Evangelical Church of Guatemala (IENPG). In between her mission appointments, she served on the staff of the Presbyterian Peacemaking Program. Omar grew up in Guatemala.  Prior to coming under mission appointment, Omar worked for Faith in Practice, an organization that facilitates short-term medical, surgical, and dental teams that serve Guatemala’s economically impoverished people. Omar felt called to return to his native country to be a part of the solution to the large disparities in Guatemalan society.  He wanted to give back to those who were not offered the same opportunities.

Omar is grateful to serve under PC (USA) mission appointment, especially with communities along the US and Mexico border.  Having immigrated to the United States in his early twenties, he understands personally the difficulties of working cross-culturally, but also has rejoiced in the richness that can be achieved when this kind of work is done well.  “I get to be a part of something larger that brings God’s hope to a place that struggles with the ills of the human world,” he explains. “I am excited to share my perspective from growing up in Guatemala, studying in the US, and working with individuals from diverse backgrounds.”

For Amanda, her time in Guatemala and her travels to several Latin American countries have helped her develop an immense appreciation of the region’s people. “Their understanding and expression of their faith have touched me in meaningful ways,” she says. “There are individuals and communities working out of their understanding of faith to transform their brokenness.”

They say that I John 3: 16-18 is a meaningful scripture passage for them. It says: “We know love by this, that he laid down his life for us—and we ought to lay down our lives for one another. How does God’s love abide in anyone who has the world’s goods and sees a brother or sister in need and yet refuses help? Little children, let us love, not in word or speech, but in truth and action.”

“We often see groups wanting to act to help their brothers and sisters in need,” Amanda observes. “However, we still have much to learn about laying down our lives for one another. Many times our mission response comes out of a place of charity without understanding the local context and local partners.  This passage asks that we act out of a place of truth and love – about taking time to understand one another and learning from one another. It is not about a quick response to what we perceive as need, but in dialoguing with partners to understand what they perceive and to be witnesses to how they are responding. Through this kind of ministry in mission we all are receiving, and we are all giving.” Omar explains further, “We cannot refuse being part of those who have so much and neglect those who are in need.  This does not mean we do for them or have to come with the answers.  It’s about speaking with truth and love, letting those communities know we want to accompany them and work together to find how God’s justice can be realized.”

Omar and Amanda bring a diverse educational background to their duties. Omar earned an undergraduate degree from Indiana University in New Albany, IN in operational management.  Amanda earned an undergraduate degree in environmental studies from Denison University in Granville, Ohio, and is completing a Master’s degree in International and Global Education through Drexel University in Philadelphia, PA.  They are members of Highland Presbyterian Church in Louisville and the parents of two young sons, Alejandro and Matteo.