A letter from Eric Hinderliter in Lithuania

Our Partner at 20
This year LCC International University, our mission partner, is observing its 20th anniversary.  A September celebration brought together past graduates, former teachers, and donors to dedicate a new residence hall and to remember the past. A little LCC history lesson might be in order. 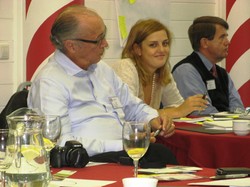 Ledina Lamani (center), a 2009 LCC grad from Albania, with founding board member Art DeFehr (left) from Manitoba, Canada, and Howard Newell, a short-term faculty member from Union University in Tennessee, at a meeting about the future direction of the university

The founding of LCC in 1991 as “Lithuania Christian College” coincided with the end of the Soviet Union the same year.  Suddenly the closed-off space of the Soviet Union became available for all kinds of Christian mission efforts, including establishing Christian schools and colleges. Unlike other mission-oriented schools, LCC is not the product of a mission agency; it was established in 1991 by a joint venture of Lithuanian, Canadian and American foundations. LCC has strong Mennonite connections, as many of the founders had family roots in parts of the Soviet Union.  Presbyterians joined this effort in 1992.  The 1993 PC(USA) strategy document, “Mission in the 1990s,” highlighted the new possibilities for Christian mission in the former Soviet Union. It spoke of a “lifetime of change” taking place in socialist countries and pointed to “a tremendous hunger for faith and hope which only the Gospel of Jesus Christ can provide.”  Over the next 10 years nearly 100 mission workers were sent to the newly independent states of the former Soviet Union.  Over the years more than a dozen Presbyterians have served at LCC as teachers, board members, and even interim president. 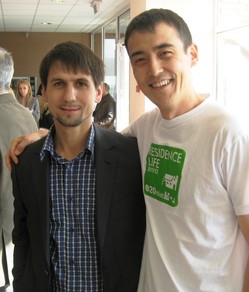 Viacheslav Verbitskij (left), pastor of a Baptist church in Shymkent, Kazakhstan, with Bekzhan Upeshov, a current LCC student and member of his church.

The early years were marked by struggles over gaining accreditation, acquiring land and constructing buildings, and affirming a Christian identity in post-communist space. Many schools were opened in the newly independent countries in a burst of Christian mission enthusiasm.  However, ambitions often exceeded the reality over the first decade of the post-communist era. The environment proved more hostile than expected as the educational space was largely controlled by a monopoly of state-run universities.  The religious landscape was dominated by Catholic and Orthodox Church establishments that accepted Protestant and evangelical churches only with difficulty. LCC passed through these years to become one of the more stable independent Christian colleges in the former Soviet Union.

Starting in 2000, LCC enrollment at its permanent campus in Klaipėda grew rapidly. LCC invested in a residential-style campus, now with a classroom building, two dormitories, and a sports hall. Its mission is witness to the truth of the gospel. LCC’s Christian focus is ecumenical; the Christian emphasis starts with the Apostle’s Creed. LCC’s values “affirm a Christian worldview that invites all people to grow in truth and restoration through the power of the Gospel of Jesus Christ.”

In 2004 two events transformed LCC’s mission to a new level.  The first was the accession of Lithuania to the European Union; as a result of barrier-free movement, students witnessed an explosion in study choices to the west in the ‘old EU.’  More important was a deliberate strategic initiative to increase the non-Lithuanian enrollment to 40 percent or more of the student body.  LCC began active student recruitment in Ukraine, Moldova, Russia, Belarus, Albania, Kazakhstan and other former Soviet countries.  Results of this "eastern initiative" came quickly: in 2002 LCC graduates came from three countries; by 2008 the graduation class included 11 countries. Three new majors were added to the original English language and literature: business administration, theology, and most recently psychology. 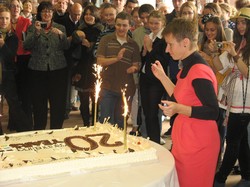 Today LCC has many identities.  Some view LCC as a mission outpost.  Others emphasize that LCC is founded on the North American Christian liberal arts model. Because of its origins in Lithuania and the requirements for accreditation, some view LCC as preeminently a Lithuanian school.  And others, given the transformation of the strategic outreach to the east, see LCC as international, not bound by political or cultural borders.  Indeed, LCC has multiple identities; it is all of these and more.

Looking forward, LCC faces many challenges.  Resources remain scarce.  LCC needs to raise about $2 million each year for capital needs and operating expenses. Qualified faculty who can stay for long-term teaching remains a desideratum.  The original plan to rely on "volunteer" faculty—dubbed "externally funded"—has reached its end; a quality undergraduate program cannot be built with itinerating, short-term faculty. LCC is working toward full funding of faculty from its own resources by 2017.  Until then, mission-funded staff remain critical for LCC.  The curriculum needs vast expansion, especially in the arts and sciences, to meet the expectations of prospective students and to satisfy academic accrediting agencies.  LCC is in a time of transition of senior leadership.  New leadership needs to be grafted into both the administration and the board of directors. Recruiting a suitable permanent president to take LCC into a new era has proved more difficult than imagined.  A presidential search—the third since 2007—is now under way.  LCC’s unique place in the new century will need to be built on two pillars: Christian witness and academic quality.

In the LCC 20th anniversary commemorative booklet we expressed this hope: “We believe in the liberal arts and we are glad to be part of helping LCC towards this goal.  Our commitment is to students. They deserve a quality education which is rigorous and relevant.  It is a matter of faithful Christian stewardship. After 10 years here we give credit where credit is due: ‘This is the Lord’s doing; it is marvelous in our eyes’” (Psalm 118:23).

Grace and peace to all of you,