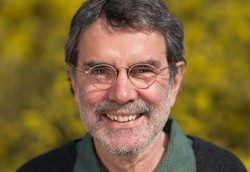 Burkhard makes periodic trips to the US and is available to speak as his schedule permits.  Email him or the Mission Connections office (Rachel.Anderson@pcusa.org) to extend an invitation to visit your congregation or organization.

Subscribe to the e-group Burkhard moderates to connect supporters in Roma work.

About Burkhard Paetzold's ministry
As regional liaison Burkhard Paetzold helps connect Presbyterians in the United States with partner churches and programs in Eastern and Central Europe. He also implements regional strategies and provides support for mission personnel. Much of his ministry is with the Roma people of Central and Eastern Europe. Formerly referred to as “Gypsies,” a term now considered pejorative, they have encountered discrimination and oppression for centuries. Burkhard works with partners to promote the participation of Roma in congregational and church life, develop Roma leadership, and improve the economic development and education for Roma.

Burkhard Paetzold is helping PC(USA) partner churches to get a fresh vision of the Christian faith that transcends old divisions and builds on new opportunities. “Christians and non-Christians need to be enabled to see Christianity in a new light,” Burkhard says. “The challenge for Christians is to work for peace, justice and the integrity of creation and to communicate expressions of faith, hope and solidarity within a seemingly overwhelming “new world‟ of greed, selfishness and material temptations.”

Burkhard seeks to understand the needs of partners and to connect them with the resources of the Presbyterian Church (U.S.A.). “In Central and Eastern Europe our partner churches have been re-establishing congregations, seminaries and diaconal ministries of all kinds,” Burkhard says. “They seek support, recovering from 50-plus years of different dictatorships that have affected their sense of leadership, lay involvement, holistic mission and voluntarism.” Burkhard strives to help build strong personal relationships among ecumenical partners and nurture a process of mutual learning.

Minority populations in Central and Eastern Europe face a unique set of challenges. The largest and fastest growing of these is the Roma people. “Roma people have a long history of marginalization and discrimination and our partner churches have an important role as a bridge between these people groups and the larger society,” Burkhard emphasizes. “Since some churches find that they themselves were part of a history of segregation and conflict, they sometimes need outside partners who mediate and encourage this bridge building role.”

Burkhard sees his role as a bridge-builder as one his key contributions. He builds bridges among people in Eastern Europe and between Presbyterians in the United States and partner churches. In 2008 he helped plan a visit to Eastern Europe for Presbyterian Women as part of the group’s Global Exchange program. “It was an amazing trip full of surprising encounters for all of us,” Burkhard notes. “The highlight, however, is the fact that this group of committed representatives from all Presbyterian synods and their new friends in Eastern Europe have started networking and sharing ideas for holistic mission projects.

Burkhard has a home page on Mission Crossroads, a social networking site for PC(USA) mission supporters. There he moderates the Roma People Bridging Group and the Romanian Network Initiative.

Regional context
Theologians from Central and Eastern Europe contributed a great deal to the Protestant Reformation. Later the region was a battlefield of the Thirty Years War with Roman Catholics and Protestants fighting each other. In the 20th century, Eastern and Central European countries suffered heavily under Nazi occupation. Jewish and Roma populations were sent to concentration camps and millions were killed. After World War II Stalinism ruled as the new governing philosophy in the region. A misguided socialism repressed communication and the practice of religion and isolated the people from the West. After Gorbachev’s perestroika or restructuring, the Velvet Revolution in Prague, and the 1989 opening of the Berlin Wall, Central and Eastern Europe rediscovered its diverse history, including its historic conflicts related to economic, cultural and religious divisions. At the same time, doors were opened for a freer expression of religious sentiments and new opportunities for churches to do the work of the gospel. PC(USA) partner churches are seeking to seize these opportunities and to move beyond a long history in which religion has been a source of controversy and enmity.

About Burkhard Paetzold
Burkhard began mission service with the PC(USA) in 1998 when he was named coordinator for special projects with the Jinishian Memorial Program, a PC(USA) ministry with Armenians. His work focused on the Republic of Armenia and the Middle East. He oversaw the initiation and implementation of new development plans and provided information and advice about sustainable development themes throughout the Jinishian Memorial Program.

A native of Germany, Burkhard lives with his family near Berlin. He has worked as a volunteer with the Evangelische Kirche Berlin-Brandenburg, one of the Protestant churches in the former German Democratic Republic (East Germany). His work with a program called “Justice, Peace and the Integrity of Creation” led him to mission service.