A letter from Simon Park in Korea

The fact is that Haejung and I lived as the "1 percent"(1 -footnote below) class in North Korea, and our experiences do not represent the lives of the ordinary citizens of the country.  In some aspects we lived in lifestyles much closer to the people when we were in Congo and Nepal.  We could argue that we were not allowed to, in North Korea, but I am not sure whether we would have voluntarily lived the lives of the 99 percent, even 50 percent.  This is to simply remind you that the experiences we share in our letters are those of the privileged.

We were privileged in two dimensions.  We worked and lived at PUST, not much different from living in a diplomatic compound and, second, we had the economic means and the currency to eat and shop in the "hard currency"(2) world. 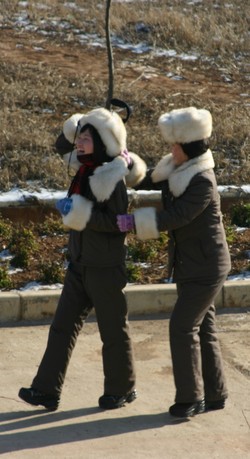 Women soldiers in a lighter moment.

PUST sits on a 216-acre piece of land just south of Pyongyang inner city near the interstate highway connecting to Kaesung.  There are many groups of people living and working on the campus, starting with 60 or so expatriate faculty members, administrators and operations staff.  Faculty members come from many English-speaking countries, the majority of them having Korean heritage.  Many of the operations and maintenance staff are ethnic Korean-Chinese from Yanbian Province in China, and some are ethnic Koreans with citizenships of other countries such as Australia, Canada and the United States.  There are currently 200 undergraduate and 70 graduate students on campus.  All male and selected by the North Korean government based on their academic ability and family background (I assume).  Approximately 70 percent are from Pyongyang and 30 percent are from other parts of the country.1 They all live on campus and are not allowed to go home during the school term, although that may take less than 30 minutes by car for the students from Pyongyang.  Nonetheless, they clearly belong in the top 1 percent of the NK students, both in their abilities and the special privilege they enjoy.  There are also 25 or so professors on research appointments at PUST from Kim Il Sung University.  They are designated as the future professors to teach side by side with the foreign professors and perhaps lead PUST in the near future.  They study English and monitor teaching materials presently used, and they also reside on campus.

There is a North Korean team of academic administrators, starting from the president, vice president and others, who do not seem to be on campus at night.  Then there is a team of eight very important External Relations officers who process our visa, make arrangements for our visits to the outside, and accompany us to all outings.  We cannot go anywhere without them—both by the regulations and for practical reasons they are our minders and guides.2  There are also 65 women soldiers who guard the grounds.  They keep uninvited persons from entering the campus as well as keeping the members of PUST in.  In addition, there are administrative, kitchen staff, and cleaning crew who commute daily via a PUST bus.  All members of these groups belong in the "1 percent"(3) in that they have been selected by the North Korean government and are a part of the experiment to prepare the society for eventual opening.   PUST is a very high-stake experiment for North Korea. 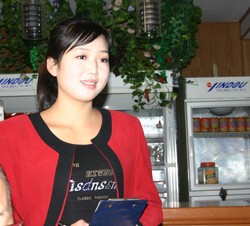 Attractive server who could not serve different food together

During the drive to complete the construction of the promised world to unveil in April 2012, all universities in North Korea are closed and the students work on construction projects. PUST students, however, continue their studies as the only international university in the country. Members of the university community also eat three square meals a day—all they want though the fares are simple.  Their sleeping quarters are heated, and they have easy access to communal bath and sauna.3 Yes, these are all privileges of being in the 1 percent.  We were even more privileged than the students in that we had water heaters in our bathrooms and did not have to participate in snow removal. (4)

There are many others in the 1 percent club.  One percent of 25 million people, estimated to be the population of North Korea, comes to 250,000.  These high-level officials and military officers must enjoy some special perks as in other societies.  These people have the power and the money to shop in hard-currency stores and dine in hotel restaurants, and they have cars to take them where they want to go, and most of them must be living in Pyongyang.  So did we.

In our earlier letter, we shared our shopping experiences.  In this one we want to share the lifestyle that is possible only if one has hard currencies, both the money itself and the privilege to use them. Stores and hotels in North Korea accessible to foreign nationals accept the Euro, U.S. dollar, and Chinese yuan.  Prices are posted in a virtual currency that closely tracks U.S. dollars times 100—that is, one unit of this currency is approximately one cent.  When the prices are quoted verbally, it is most often done in Euro and the exchange rate into dollars is mostly very bad. Once we paid $1.70 per Euro. At hotels they posted rates and those were more reasonable.

In short, you can find almost anything in these stores: imported goods and North Korean–made goods for export as well as medicinal herbs popular in East Asia.  One shop that surprised us most was the three-story consumer electronics shop near the Japanese shop.  On the first floor they had all the popular electronic goods—notebook computers (Asus, Toshiba, Dell and Sony brands), rice cookers, hot water pots, digital cameras, including current model DSLRs, and espresso machines.  The most expensive home-use espresso machine was priced around $4,700.  On the second floor they displayed air conditioners, refrigerators, freezers, stoves, filtered-water dispensers, and Italian brand water heaters.  More expensive ones matched in size and features any you would find in stores in South Korea, Japan and the United States, though the prices seemed a bit higher than what we have seen in other countries.  The third floor was completely dedicated to flat panel televisions and karaoke machines.  Again they ranged from 32 inches to beyond 55-inch models.  We are convinced that the store was not simply for propaganda, but a store meeting genuine demands.  Many of the restaurants we visited had flat panel displays and karaoke machines.

Most of the shops and restaurants in North Korea specialize and offer very limited selections.  Given the economy based on government allocations, there are neither many items available for purchase nor the money.  Even restaurants specialize in one line of dishes, noodles, meat, etc. (5) We saw many large-scale restaurants with the sign "Dahn-gogi" (dog meat).  This arrangement may increase the efficiency of the store operations but does not offer consumer choices. Haebangsan Hotel restaurant is well known for their Galbi-tang (rib soup) and Kori-gomtang (oxtail soup).  When we ordered these dishes, and only these dishes, they were served efficiently and the dishes were served together.  This was true in other specialty restaurants for Naengmyun (cold noodles) and pizza and pasta.  Yes, we went to a pizza restaurant.  Why? We were overruled.  Actually the pizza was more suitable to our taste than the ones we find in Daejeon. 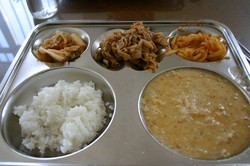 Typical meal at the PUST cafeteria

Some hard-currency restaurants are the exception.  They offer a full line of cuisine much like the restaurants we are used to. However, when we ordered different dishes that must be prepared separately, we invariably caused a logistics nightmare for the kitchen and the service staff.  The servers are very attractive and polite, but the service would be enough to downgrade the restaurants.  Almost every time we ordered a variety of dishes, they came out one at a time in a serial fashion with enough time lag between the dishes to make us suspect that they are cooking dishes one at a time.  Once a broiled fish was served without rice.  It turned out that the kitchen learned that they were out of cooked rice only when they were ready to serve the fish.  Thus our friend had to wait while a fresh pot of rice was prepared.  Of course she was through with the fish when the steaming bowl of rice was served.  Luckily her husband's dish was served around the same time and she could pinch off some and did not have to eat just the rice. (6)  The same scene repeated itself whenever we went as a group and ordered a variety of dishes from the menu.

The quality of food at these restaurants was generally very good.  After all, the clientele are the upper crusts of the 1 percent group.  In a society where uniformity is valued and insisted upon, and where standing in line for anything, including waiting for their turn in a public bath house, is the norm, good food served one at a time with long intervals must be perfectly acceptable.  When we came out of our private dining room at the Haebangsan restaurant, the hall was full of North Koreans dining.  In the parking lot we saw more than a dozen Mercedes Benz and Lexus vehicles waiting for their owners, clearly top 1 percent of the 1 percent.

Compared to July 2011, we saw many more cars on the streets and at a bridge even experienced a sort of a traffic jam.  Individuals are not allowed to own cars, so the vehicles are registered in the name of institutions.  Many more institutions these days must be able to afford vehicles and the fuel.  Gasoline costs approximately $20 per ticket, good enough for 19.4 liters (about 5 gallons).  At the Tongil market we saw a long line of taxis waiting for their fares. Since foreigners are not allowed to ride in taxis, there must be sufficient North Koreans riders with money.  The 1 percent apart from the 99 percent exists even in this society.

It is our hope and prayer that the day will come soon when the ordinary people may take their children to the restaurants we dined in and each order their favorite dishes.  The day may come sooner than we think!

1 I learned that this percentage distribution is similar in other prestigious institutions.  It is therefore possible that the selection process also included the geographical distribution.)

2 While we were visiting a market, we jokingly said that we will take a taxi back to the campus.  We learned that the guard at the gate would not let us in, even if they knew we were professors, unless accompanied by one or more of the guards.

3 Different groups are assigned days of the week for the facilities, minimizing the unintended meetings between different groups outside of the watchful eyes of the state.

4 They did not show any animosity toward these tasks; rather they made a game out of it.  The students at PUST are the most polite group we have encountered.  When Simon was carrying computer and projector to and from class students always volunteered to help, even the ones who do not know him.

5 A very large restaurant named Pyongyang Noodle House always had a large crowed lined up.  We are told that the restaurant only sold two items, cold noodle soup and hot noodle soup, and they sell upwards of 10,000 servings per day, very affordable, fast and tasty.

6 In North Korean restaurants even kimchee is sold as a la carte menu item.  By the time the rice arrived, we had long finished the kimchee.