Learn more about Presbyterian participation in the Commission at:

The Presbyterian Ministry at the United Nations, Ecumenical Women, and others will use Twitter during the Commission. Hashtags will include #PCUSACSW60, #CSW60, and #EcuWomenCSW.

Watch for additional sources of information.

The priority theme for the 60th Session of the UN Commission on the Status of Women will be "Women’s empowerment and its link to sustainable development".

“Lift every voice and sing, Till earth and heaven ring, Ring with the harmonies of Liberty; Let our rejoicing rise High as the list’ning skies, Let it resound loud as the rolling sea...Let us march on till victory is won.” –James Weldon Johnson 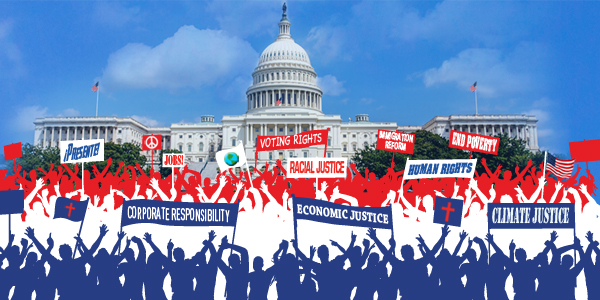 In our neighborhoods and around the world, social, economic, corporate, and political powers are working to reduce citizens’ access to decision-making. These practices violate the rights and silence the voices of those most affected by these decisions and severely hamper the ability of all citizens to determine the best policies for our communities and nations. As Christians, God calls us to lift up all voices so that we the people might regain influence in the policies that affect our nation and our world. Come to Advocacy Training Weekend April 15-18 and lift up your voice for transparent and participatory government at home and abroad.

At Compassion Peace and Justice Training Day, we will take a look at how Presbyterians are working to address the suppression of political and economic rights of people of color, immigrants, workers, and the poor in our own country and abroad. We will examine how decisions that affect the global economy, our day-to-day life, and the well-being of the entire global community are being made in secret with little or no transparency or accountability.

Join the ecumenical community for Ecumenical Advocacy Days, beginning the evening of Friday April 15th and culminating with a lobby day on Monday April 18th. Lift up your voice alongside other people of faith as you speak truth to power concerning the suppression of political and economic rights and the corporate undermining of the local voices of ordinary people, in the U.S. and around the world.

A discount rate for both events will be offered at the Double Tree Crystal City. Click here for more information and to book a room.

Human Rights of children in Palestine and Israel

According to the Israeli human rights organization, B’Tselem, as of the end of March 2015, 184 Palestinian minors were held in Israeli custody.   B’Tselem notes, “the military law applied in the West Bank…denies them the protections accorded to minors under both international and Israeli law.”  A 2013 UNICEF report states, “Ill-treatment of Palestinian children in the Israeli military detention system appears to be widespread, systematic and institutionalized.”  While noting positive progress on some fronts, a UNICEF update this year states, “The data demonstrates the need for further actions to improve the protection of children in military detention, as reports of alleged ill-treatment of children during arrest, transfer, interrogation and detention have not significantly decreased in 2013 and 2014.”

The American Friends Service Committee has posted video clips from a June 2, 2015 Congressional Briefing. Young Adult Volunteers with the Presbyterian Office of Public Witness led the worship at an Interfaith Vigil on the occasion of the International Day for Protection of Children, Monday, June 1, at noon, at the U.S. Capitol's Upper Senate Park, 200 New Jersey Ave NW, Washington, DC 20001. The vigil will highlight the issue of Palestinian children in Israeli detention and focus on the need to protect all children, both within our US communities and abroad.

The 221st General Assembly (2014) of the Presbyterian Church (U.S.A.) called the church's attention to this issue and directed the Presbyterian Mission Agency, to create information documents, study guides, or other educational materials using information, research, and statistics from the Palestinian Authority and the State of Israel, United Nations agencies, including OCHA and UNICEF, and other human rights or nongovernmental organizations, such as B’Tselem, Defense for Children International Palestine, and Amnesty International to be made available through digital download at the PC(USA) website, as well as links to materials and research from other organizations.

The action of the 221st General Assembly (2014) called the church's attention to human rights issues of Israeli and Palestinian children. Defense for Children International Palestine has recently released a report on the situation of children’s rights in 10 Arab countries.

The 220th General Assembly (2012) approved a denomination-wide boycott of all Israeli products coming from the occupied Palestinian territories by a 71% vote. The motion included:

Find resources to help interpret and carry out the campaign from the Presbyterian Church (U.S.A.), other denominations, and ecumenical and secular organizations.

Holy Discontentment: Boycott! The Power of the Pocketbook to Create Social Change Download

Observe an Orange Day on the 25th of each month

On the 25th of each month – join people around the world in observing an Orange Day to work for an end to violence against women and girls. In August,  the UNiTE to End Violence against Women invites us to plan to “Orange the World” for the 16 Days of Activism against Gender-Based Violence from 25 November, the International Day for the Elimination of Violence against Women, to Human Rights Day on 10 December.

Share your ideas and ways your congregation observes Orange Days.

View young adult interns as they reflect on their commitment to end violence against women and girls.

How to schedule a seminar

Amid the restless spirits and often-tough diplomacy of the United Nations, the Presbyterian Ministry at the United Nations helps inspire, equip and connect Presbyterians for ministry as faithful disciples of Jesus in the global community. We educate with the hope of helping individuals live out God’s call in Christ to live with compassion, seek peace, and pursue justice wherever they go.

Presbyterian Ministry at the United Nations

Donate to
Presbyterian Ministry at the United Nations

News for
Presbyterian Ministry at the United Nations