For information about Presbyterians serving in Lebanon, please contact the office for the Middle East and Europe.

Click here to donate to PC(USA) partners in Lebanon as they continue to serve during the current conflict.

Presbyterian Disaster Assistance meets with ecumenical partners in Lebanon
Ongoing civil war in Syria and impact on refugees top agenda
Since the Syrian Civil War began in March 2011, Presbyterian Disaster Assistance has been responding to the needs of affected communities in Syria and Lebanon. Working in conjunction with ACT Alliance (Action by Churches Together), members and ecumenical partners have been providing relief to refugees in neighboring countries and to internally displaced Syrians.

Hope Incarnated: The Church in Iraq, Syria, and Lebanon

A letter from the National Evangelical Synod of Syria and Lebanon
As our Armenian brothers and sisters are commemorating the Hundred Anniversary of the massacre inflicted on them in early 20th century, we watch with great sadness and are stunned by the news of Christian villages in the Northeast of Syria being criminally attacked by ISIS. We appeal to all who love peace and justice to cry with us to the God of life and hope for this tragedy to come to an end.

Lebanese seminarian brings prayers in Arabic and a window on the Middle East to Huntsville, Ala. Rola Al Ashkar encourages people of faith to be more active in lobbying the U.S. government to participate in peace-building solutions in the area.

Practicing hospitality in an inhospitable place
Christian churches and Muslim communities in Lebanon are doing what they can to take care of people displaced by war, violence and terrorism

Christian history in Lebanon goes back to the days when Christ visited south Lebanon during his public ministry. Until the early 1970s Christians comprised the majority of the Lebanese population but at present they constitute less than 45 percent.

Lebanon is the only country in the Middle East in which religious freedom is constitutionally protected.

The Presbyterian Church (U.S.A.) involvement in Lebanon began in the early 1800s, through missionaries from the Reformed tradition who worked there in education and health care. In 1956 the national church, known as the National Evangelical Synod of Syria and Lebanon, assumed total charge of the ministries of the Presbyterian churches.

At present PC(USA) involvement in Lebanon is through mission personnel working with traditional partners in the country: the National Evangelical Synod of Syria and Lebanon (NESSL), the Near East School of Theology (NEST), the Middle East Council of Churches (MECC) and the Jinishian Memorial Program.

Read more for a complete history and overview.

National Evangelical Synod of Syria and Lebanon
Begun in 1823, the NESSL is one of the earliest active and continuing overseas mission outreaches for the Presbyterian Church (U.S.A.). Through this mission Presbyterian churches throughout Syria and Lebanon were planted. The entire Bible was translated into Arabic and printed in that language for the first time. World-class educational institutions were established; for example, the American University at Beirut, Beirut College for Women [now a full university known as Lebanese American University] and some 20 elementary and secondary schools. Health institutions (e.g., Hamlin Hospital) and other ministries were started and have continued to flourish. The church is challenged with rebuilding its membership after a 17-year civil war in Lebanon and devastating conditions resulting from recurring Middle East conflicts. 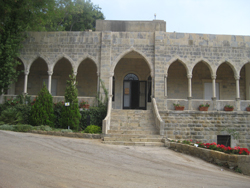 The NESSL owns and operates an excellent conference center known as Dhour El Choueir Conference Center. Located in a gorgeous area of the mountains east of Beirut, this is the original camp and conference site of the Presbyterian Mission in Syria and Lebanon. The center is now fully renovated after nearly total destruction during the civil war (when it had been occupied by warring factions). Today the center is throbbing with activities for children, youth, women and families. It is also a popular location for conferences and retreats. The Synod considers Dhour El Choueir Conference Center to be a major locus for continuing education of clergy and laity. Note: If you would like more information on Dhour El Choueir Conference Center — availability, rates, etc. — please contact Najla Kassab or visit the National Evangelical Synod of Syria and Lebanon website. 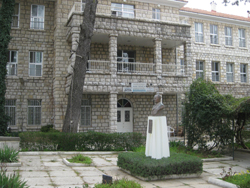 One of the buildings on Hamlin Hospital’s lovely campus. Hammana, Lebanon.

The NESSL also owns and operates Hamlin Hospital, an institution of distinction in the area of health care. Hamlin Hospital was originally an emphysema clinic located in the cool, fresh air of the mountains just east of Beirut. Later Hamlin also developed into a mother and child hospital. During the civil war it served Lebanon as a general emergency hospital. Hamlin Hospital is now reconstituting itself as a specialty hospital for geriatric nursing and other services in accordance with the emerging needs of its mountainous location.

Support PC(USA)'s partnership with the National Evangelical Synod of Syria and Lebanon.

Near East School of Theology
The Near East School of Theology (NEST) is a high-level theological seminary located in Beirut. With roots tracing all the way back to 1835, NEST was actually founded in 1932 with the merger of two theological schools: one from Turkey and one from Lebanon. “From the beginning NEST has always been multi-national, multi-confessional, and multi-cultural,” (George F. Sabra, “Truth and Service: A History of the Near East School of Theology,” Librarie Antoine: 2009, p. 125) serving Presbyterians, Congregationalists, Lutherans and Episcopalians from Lebanon, Syria, Palestine/Israel, Turkey, Iran and several African nations. NEST is committed to providing top-quality education and training to Arab, Armenian, other Middle Eastern, African and European church leaders. NEST prepares individuals for pastoral, academic and other church leadership positions throughout the region.

Watch a video of the installation of NEST President- Dr. George Sabra

VIDEO: The Near East School of Theology (NEST) serves a vital role educating leaders for churches in the Middle East.

Support PC(USA)'s partnership with the Near East School of Theology.

Lebanese American University (LAU), Beirut
Founded by American Presbyterian mission personnel in 1835, this school was the first girls’ school in the Ottoman Empire. In the 1970s it became a coeducational university. LAU is now accredited as a full-scale American university on three campuses: Beirut, Byblos and Sidon. The university continues to pride itself on being church-related even though it serves the total mix of religious and ethnic populations of the entire Middle East. The PC(USA) and its partner, the NESSL, hold four seats on LAU’s Board of Trustees and two more on the Board of International Affairs. Through the PC(USA)’s and the NESSL’s partnership with LAU, the university remains committed to enabling Christian values to impact and inform higher education.

The Syria-Lebanon Partnership Network is one among more than 40 networks that connect Presbyterians who share a common mission interest. Most participants are involved in mission partnerships through congregations, presbyteries or synods. Network members come together to coordinate efforts, share best practices and develop strategies.

The way to the watering hole: Syria-Lebanon Mission Network keynote —The Presbyterian Outlook

Until the early 1970s, Christians comprised the majority of the Lebanese population. At present Christians constitute around 30% of the population, and that percentage continues to decrease.

Lebanon is the only country in the Middle East in which religious freedom is constitutionally protected.