ACT appeal: Ukraine: Emergency assistance to refugees from Eastern Ukraine in Russia & Ukraine
ACT member Russian Orthodox Church is planning to improve the health and hygiene situation of the refugees/IDPs, and psychosocial support for the most disadvantaged fleeing conflict in eastern Ukraine

60 religious leaders from Ukraine and Russia meet in Oslo
"A very good beginning, but not yet a breakthrough"

April 2014. The current situation is undeniably sub-optimal, but there is no objective reason that Americans planning a trip to visit mission partners in Russia should not follow through with those plans. With very few exceptions, wherever a group of Presbyterians may go in Russia, Ellen or I will be going with them. None of the trips planned for this summer involve regions where it would be unwise to go. If the situation warrants a change in that assessment you can be sure that we will let you know.—Al Smith

Presbyterians and the Roma of Russia

Jan 2013  100 percent placement
Moscow Theological Seminary, the educational flagship of the Russian Union of Evangelical Christians–Bapatists, a PC(USA) parter, has returned to it original format—distance learning

Oct 2012  Moscow Protestant Chaplaincy celebrates 50 years, looks ahead to next 50 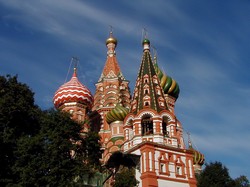 The Christian tradition emerged fully in ancient Russia in the year 988.  Prince Vladimir of Kievan Rus elected to be baptized after his envoys had seen the glories of Byzantium in Constantinople and worshipped at Hagia Sophia, then the largest cathedral in the world.  Over the centuries, the Russian Orthodox tradition spread north, northeast, and eastward across the Russian Empire until reaching Russian Alaska, even south to the coast of California.

Through imperial expansion, invitation from the Tsars, and trade other expressions of Christianity also gained roots in the Russia Empire. Catholics, Lutherans, Baptists, Methodists and others all were part of the Christian landscape.

The communist era (1917-1991) saw extraordinary persecution of Christians.  Tens of thousands of believers were killed, imprisoned, or deported to Central Asia.  Thousands of churches were destroyed or converted for utilitarian purposes (factories, offices, dispensaries, stables, etc.)  Jews, Muslims, and Buddhists endured similar repression.  For us in the United States, interaction with our Russian brothers and sisters in Christ teaches much about faithfulness, sacrifice, and a commitment to the future.  With the demise of the Union of Soviet Socialist Republics in 1991, a new era began.  It is an era with greater religious freedom and the renewal of the expressions of Christianity across today’s Russian Federation.

See the guidance from the 206th General Assembly (1994) regarding mission “…in the newly Independent states of the former Soviet Union.”

Current Presbyterian Church (U.S.A) engagement in Russia began in the 1990s with mission outreach from the national church, mission support groups, congregations, and individuals.  Our ministry is lived out through congregational partnerships (twinning), support to theological and Christian education, work with unreached peoples, and ministries of compassion (orphans, HIV/AIDS education and prevention, disaster response, etc.)

At present PC(USA) involvement in Russia is through mission personnel working with traditional churches and newly established ministries: the Union of Evangelical Christians-Baptists of the Russian Federation, the Russian Orthodox Church, the Evangelical Lutheran Church of Russia and Other States, and the Moscow Protestant Chaplaincy.

Union of Evangelical Christians-Baptists of the Russian Federation

The Baptist Union celebrates 1867 as the founding of this Christian tradition in Russia.  It is the largest Protestant denomination in the country with over 1,800 congregations from Kaliningrad in the west to Vladivostok in the east.  Today, their congregations are marked by vibrant worship and significant social outreach in their communities.  The majority of PC(USA) congregations “twinned” with Russia congregations are partnered with Baptists.  Support can be offered here 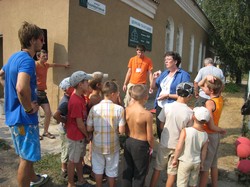 The Russian Orthodox Church, which has existed for over 1,000 years, is the dominant Christian presence in Russia today.  Since the late 1980s, the church has experienced a period of dramatic renewal with over 13,000 parishes across the country.  Where invited, the PC(USA) cooperates in social ministries such as outreach to special needs children, HIV/AIDS education and prevention, and disaster assistance.

The Lutheran tradition with a strong German heritage has been present in Russia for over 400 years.  Its roots include immigration to major cities, conquest of border lands, and special invitations from the Tsars.  The Evangelical Lutheran Church consists of two synods in European Russia and in Siberia and the Far East.  The PC(USA) has maintained a strong connection with the Theological Seminary of the ELC for over a decade.

The Moscow Protestant Chaplaincy is an international, interdenominational Christian ministry serving the English-speaking community of Moscow.  Established in 1962 by the National Council of Churches of Christ of the USA to provide Protestant ministry to the English-speaking diplomatic community, MPC today is a diverse congregation with members from nearly 30 nations.  Students, business people, diplomats make MPC their church home.  The PC(USA) was one of five founding/supporting US denominations and has maintained a deep partnership for 50 years.  Support can be offered here

Founded in 2000, the Moscow-based Narnia Center is a non-profit organization dedicated to publishing books with Christian themes for children and youth and providing training on children’s ministry through seminars and workshops.  The Narnia Center was established by PC(USA) mission coworker Donald Marsden and can be supported here.

The Kargel and Baedeker School in St. Petersburg educates its K-11 students to know God as revealed in Scripture, to develop character, and to develop the student’s full educational potential. Established by PC(USA) mission coworker Garth Moller and his wife, Lyuda the school can be supported here. 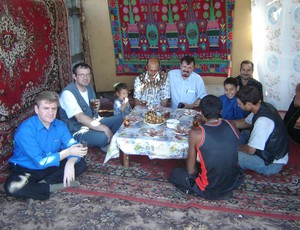 Mission Coworker Al Smith in fellowship with Roma in Russia.

Your prayers and your gifts can support a wide variety of mission activities in Russia.  From congregational partnerships (twinning), to orphanage outreach, to support for Christian education and more, you can help enable our “mission in partnership.” Click here for more details.

The Russia Mission Network (RMN) is one of more than 40 networks connecting Presbyterians with global partners.  The purpose of the RMN is to support Christ’s mission through the ministries of Russian partner churches and organizations, to share passion and interest in the country’s culture, and to learn from one another.  The network meets annually in September or October in the United States and brings together Russian church leaders and Presbyterians from across the PC(USA).  For information, contact Deb Burgess or Ellen Smith.  2016 meeting date: September 15-17; First Presbyterian Church, Asheboro, N.C.

“JB’s Reflections on Russia” Short essays on a host of Russian topics by Dr. John Bernbaum, a Presbyterian and the President of the Russian American Institute in Moscow.