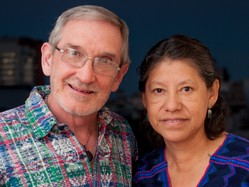 Subscribe by RSS feed to Dennis and Maribel Smith's letters

Dennis and Maribel will next be in the US in 2017.  Email them to extend an invitation to visit your congregation or organization.

About Dennis and Maribel Smith's ministry
Dennis and Maribel Smith began a new chapter of ministry in South America in January 2011. Dennis serves as the PC(USA) regional liaison for the Southern Cone and Brazil. (The Southern Cone of South America includes Argentina, Chile, Uruguay and Paraguay.) Maribel serves in ministry in the home and continues her volunteer work as part of a network that treats post-traumatic stress and seeks alternatives to violence.

From their home in Buenos Aires, Argentina, Dennis and Maribel continue to practice the gift of hospitality that so enriched their lives in Guatemala. “Our home is known as the Hotel Smith Pérez,” comments Maribel. “Over the decades we’ve had the privilege of welcoming hundreds of people into our home—especially young people. Helping guests discover how and where God is present in our homeland has been a special gift. Now, in Argentina, we hope to join our guests in discovering a new world.”

As regional liaison, Dennis  has three main responsibilities: developing the PC(USA)'s relationship with its historic mission partners, accompanying PC(USA) mission co-workers, and providing resources and advice to presbyteries and congregations that have mission partnerships in Brazil and the Southern Cone. “The PC(USA) has been engaged in mission in this region for over 150 years,” Dennis states. “We have more than a dozen mission partners who have strong and vibrant ministries. Their priorities include evangelism, promoting social justice—especially for the impoverished and the sinned against—and excellence in graduate-level theological education. I am grateful that through my work in the World Association for Christian Communication (WACC) I already know many women and men now in positions of leadership with our partner churches and ecumenical institutions. They are valued friends and respected colleagues.”

Read Dennis' commentary "An Invitation to Multicultural Study"  on the Dallas II: Better Together blog

Watch a video in which Dennis Smith talks about his work in Argentina.

Read: Missioner came of age in Guatemala - a report on Dennis and Maribel's many faithful years of mission service.

About Dennis and Maribel Smith
So much to learn, so many stories to share of how God is at work in our world. “In 33 years of mission service in Central America” observes Dennis Smith, “I witnessed how God’s people reach out to each other in difficult times. Guatemala has offered the world stories of faith, stories of the resilience born of hope in  the God of Life. This is one of the great gifts that our Central American mission partners offer Presbyterians in the United States.”

Born in St. Louis, Missouri, Dennis was an honor graduate in speech communications at Wheaton College in Illinois and subsequently completed a one-year graduate fellowship at the National College of Education in Evanston, Illinois. The following year his new home church, First Presbyterian in Evanston, sponsored him on a one-year volunteer assignment as a communication consultant to the National Evangelical Presbyterian Church of Guatemala.

In July 1984 Dennis received a new appointment at the request of the Latin American Evangelical Center for Pastoral Studies (CELEP), based in San José, Costa Rica. From Guatemala, he coordinated CELEP’s Education for Communication program. In addition to communication training, Dennis joined other Latin American colleagues in social research on the conversation among media, religion and culture. In 1996 CELEP devolved into its regional offices and Dennis’ work came under the umbrella of the Central American Evangelical Center for Pastoral Studies (CEDEPCA), where he served until 2010. In 2008 Dennis was elected president of the WACC.

Maribel was educated in Guatemala and received training as a bilingual secretary at the National Secretarial School in Guatemala.  A Roman Catholic, in 1983 she began to minister in her neighborhood with a congregation of Italian nuns. Together they discerned her gifts for ministry and her commitment to her community. She was trained as a lay pastoral agent and worked with base ecclesial communities in her neighborhood. In 1987 Maribel began working on the publications team of the Centro de Estudios, Publicaciones y Servicios de Evangelización (CEPSE), an educational resource center for base communities. In 1989 Maribel and Dennis were married and Maribel was appointed as a mission co-worker of the Presbyterian Church. In 2004 Maribel began to be mentored in holistic therapies designed to help people manage stress and seek wholeness by Karen Woehler, a PC(USA) commissioned lay pastor and retired nurse from Minnesota.

Dennis and Maribel have two sons, Lucas and Benjamin.