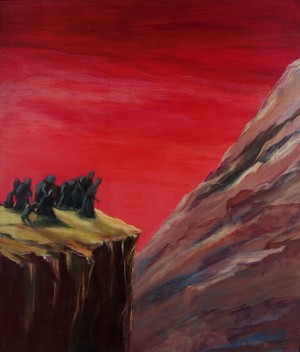 "The Cliff" by Jerusalem-born artist Lucy Boyadjian Jangijian whose Uprooted Collection interprets the Armenian Genocide and the will to endure.

Observing the Anniversary of the Armenian Genocide

In 2015, the Presbyterian Church (U.S.A.) observed the 100th anniversary of the Armenian Genocide—the systematic massacre of one and a half million Armenians that began on April 24, 1915, and continued into the early 1920s. The 221st General Assembly (2014) of the Presbyterian Church (U.S.A.) called on congregations to remember this event in worship on April 26, 2015 and every April 24 thereafter. This page provides resources for learning more about the Armenian Genocide, as well as suggestions for liturgical commemoration in years to come.

Read the full text of the PC(USA) General Assembly action.

On June, 20, 2014, the General Assembly of PC(USA) adopted a very significant resolution recognizing the Armenian Genocide (1915-1923), and calling on its member congregations to commemorate its 100th Anniversary on Sunday, April 26, 2015, and every April 24 thereafter.

Because of this action taken by our national church body we are providing resources for worship and background material for study.  This material can be used for special events in our churches related to this subject.

Who are the Armenians?

They are an ancient people who have lived for over 3,000 years in the lands of Anatolia (eastern Turkey today), and the Caucasus Mountains between the Black Sea and the Caspian Sea. They are of Indo-European origin. Their proud symbol is Mount Ararat, where the Bible tells us Noah’s ark rested after the Flood. They are a hardy people who have survived despite harsh times and terrains. Their language is distinct from any others in the area. Today, their country is located in southern Caucasus region, on less than 10 percent of their ancestral lands. Their capital is Yerevan. Throughout the world there are today around ten million Armenians living in scores of countries, including the USA.

What is their religion?

Their religion is Christianity. Apostles Bartholomew and Thaddeus brought them the Gospel, but it was in 301 AD that their King Dertad declared Christianity to be the religion of the land. Consequently, Armenians claim the distinction of being the first Christian nation in history. Their Church today is known as the Armenian Apostolic Church and their Mother Cathedral of Holy Etchmiadzin, is located in a town by the same name near the capital of Yerevan. Tradition has it that Saint Gregory the Illuminator received a vision of Christ descending from heaven and striking the earth with a golden hammer indicating where the cathedral should be built. And so the patriarch gave the church and the city its new name – Etchmiadzin – which may be translated as “the place where the Only Begotten descended.” The original church was built in the early fourth century. In the 5th Century AD their alphabet was created and the Bible was translated into their own language. Their center is in Etchmiadzin (“The Descent of the only Begotten”), located near the capital city of Yerevan.  The first Armenian church of any denomination in California was that of the First Armenian Presbyterian Church of Fresno, CA, built in 1897.

What is their national history?

Armenians have been a minority people in the middle of countries foreign to them by way of ethnicity, religion, and political affiliation. They have been invaded and dominated time and again by powers such as the Persians, Greeks, Romans, Arabs and Turks. As a result of such domination, they have faced extinction by refusing to give up their independence, or assimilation and absorption into the religions of invading forces, such as Zoroastrianism and Islam.  For many years, despite such negative forces bearing down on them they existed and even thrived in their ancestral lands of Eastern and Southern Asia Minor. Their capital was Ani (in Turkey), which lies in total ruins today.

The dual threats of extinction and assimilation grew in intensity with the invasion and occupation of Asia Minor by the Turks, over a thousand years ago. With the fall of Constantinople in 1453 A.D, their domination was complete, and no challenge to their total control existed. Armenians maintained a tenuous minority existence at the mercy of the Turkish powers. Known as the Ottoman Empire, they controlled all of the Middle East, Arabia, and North Africa. During those years, Armenians chafed under their rule, and struggled to maintain their identity and religion.

What is the Armenian Genocide?

At the turn of the century, with the weakening of the Ottoman Empire (called the “sick man of Europe”) and the rise of Western powers, a sense of paranoia took over, with resentment against and persecution of Armenians increasing steadily. Occasional “pogroms” took place, with the most notorious being the massacre of over 200,000 Armenians in and around Adana in 1896. Internal forces, known as the Young Turks, toppled the government in 1908, and replaced it. They claimed their intention to be tolerant of their minorities.

Armenians were heartened by the words of these intentions, but alas they were betrayed again. Fanatic nationalists took charge and introduced their plan for ethnic cleansing and elimination of the Armenians.

After the start of World War I, in 1914, Turkish nationalists put their plan into action. On April 24, 1915, over 200 Armenian leaders were arrested in Istanbul and subsequently hanged. Orders had been prepared and secretly distributed into all the provinces for the systematic arrest, deportation, and ultimate elimination of Armenians, when ordered to do so. Upon implementation, first the men were taken away and killed, and then the women and children were forced to march hundreds of miles to the deserts of northern Syria for their so called “resettlement.”  Not only were they forced to abandon their churches, schools, homes, fields, and shops, but on these forced marches they were given no food or water, and attacked constantly by soldiers and civilians. These atrocities continued throughout the war years and beyond, into the early 1920’s. One and a half million Armenians perished, and only half a million survived as refugees in Syria and surrounding countries.  Only some 200,000 Armenians survived in Turkey by being forced to denounce their faith and assimilated in the culture and religion foreign to them.

Why call this a genocide?

These massacres are now recognized as genocide because there was put into effect, by central authorities, the carefully planned elimination of an ethnic minority in Turkey.  They conform to the definition of genocide adopted in 1948 by the Geneva Convention on the Prevention and Punishment of the Crime of Genocide. Raphael Lemkin, a survivor of the Holocaust, coined that term and publicly acknowledged the massacres of the Armenians to be fitting that definition. There are voluminous books and records of these atrocities, and notable among them is the report submitted to the British Government in 1916, by Viscount Bryce.1 It contains eye witness accounts and testimonies of the few who survived.

What about American involvement?

As a nation, America was neutral in the early years of World War I, and could do nothing short of invading Turkey, to put a stop to the atrocities. However, much was done by American missionaries in Turkey to alert the nation to what was going on.  American Ambassador Henry Morgenthau tried hard to alert his superiors about this and subsequently published his reports in “The Murder of a Nation.” Extensive relief efforts were organized by Near East Relief and other agencies, raising millions of dollars in a monumental campaign on their behalf.  An excellent compilation of such efforts, beginning with the American Red Cross, is found in Peter Balakian’s  book, “The Burning Tigris: The Armenian Genocide and America’s Response.” For years, “Remember the starving Armenians” was a saying heard in most households, as mothers urged their children to eat their food.  A documentary film titled “America, We Thank You” on this subject has been produced by the Armenian National Committee.

In 1948 the American Church Committee for Armenia submitted a report, signed by 20,000 American clergy, to George Marshall, Secretary of State, calling on our government to advocate on behalf of the Armenians’ cause. It calls to “place and keep on the agenda of the Department of State, for consideration and action in due time, the problem of neglected justice and continued violence done in the lives, the property, the lands, and destiny of a fellow Christian people.”

What about the Presbyterian Church?

Not only did our missionaries submit many reports and requests on behalf of suffering Armenians, during 1914 and years after, but our General Assemblies in 1918, 1919, and 1920, adopted formal resolutions vehemently protesting against the massacres and calling on our government to act on their behalf. In 1920, the General Assembly endorsed the Near East Relief for its great service to stricken Armenia. Through formal and informal channels our churches provided vast resources for the alleviation of the suffering of the Armenians.  On June 20, 2014, our General Assembly, meeting in Detroit, formally adopted an overture inviting member churches to observe its 100th Anniversary on April 26, 2015, and calling on the US Congress to give it official recognition as the Armenian Genocide.

What about other genocides?

Not only Armenians but other minority Christian communities suffered tremendous atrocities during 1914-1918 under the direction of the Ottoman government. Christians of Assyrian, Greek, Chaldean, and Aramean descent, totaling some 600,000, perished.  Relatively soon after the genocide of the Armenians, came the Jewish Holocaust in Europe perpetrated by Nazi Germany. Partly due to their military alliance with the Ottomans in WWI, some German authorities were seen to tolerate the atrocities of 1914-1918. Eyewitness accounts show complicity in some cases, with German soldiers mingling with Turkish soldiers on death marches. (Political alliances also silenced criticism of the massacres of at least 200,000 Armenians between 1894-96, following the 1878 Russo-Turkish war and the association of Armenians with the Russian side.)

The genocide of the Armenians was a precursor to the Jewish Holocaust in the late 1930’s to early 1940’s. Hitler is reported to have said, “Who remembers the Armenians?” when cautioned about repercussions from German treatment of the Jews. Six million Jews and other “undesirables” were exterminated in that horrible chapter. Similar to the “end of the Armenian question” in Turkey, the Holocaust was to be “the end of the Jewish question” in Europe. April 16, 2015, is the day of remembrance of this Holocaust.

In more recent times, there have been massacres and genocides in South East Asia (notably Cambodia and East Timor), and Central Africa (notably the Darfur region of Sudan and Rwanda). Today atrocities verging close to genocide are happening in the Middle East and in sub-Saharan Africa. We must not ignore these terrible events. We must use our resources to bring aid to the victims, and seek an end to such atrocities by institutions of international law. The observance of the 100th Anniversary of the Armenian Genocide must serve not only the cause of the Armenians, but sensitize us to similar (if smaller scale) atrocities and ethnic cleansing so that we may support governmental and private efforts to put an end to them.

What does this mean to me?

If the reader is not Armenian, the tendency would be to consider all this as past history, as tragic as it was, and to go on to other pressing issues of our day. However, such an approach is dangerous because insensitivity and dismissal of the past leaves us open and vulnerable to similar forces of destruction at work in our day. Passivity in the face of violence means encouragement to the perpetrators of evil to continue their destructive behavior unabated. When we pray, “Lord, make me an instrument of your peace...,” we are praying for eyes to see, for hearts to weep, and for hands to reach out in blessing and life.

The Genocide Education Project and Facing History and Ourselves have a wealth of resources for students and teachers in public or private schools.

Margaret Ajemian Ahnert, The Knock at the Door: A Journey Through the Darkness of the Armenian Genocide (Beaufort Books, 2007)

Marjorie Housepian Dobkin, Smyrna 1922: The Destruction of a City (Faber and Faber, 1972)