The FONDAMA network intends to “restore the Haitian environment toward food sovereignty and sustainability.” FONDAMA wants to secure food sovereignty through the promotion of family and cooperative agriculture. An agriculture that is organic and respectful of the environment so that the rights of future generations may be protected.

Yzméne Elias, from the rural community of Seramo, with cabbages she grew using the old tire system that she learned from a workshop held in Bassin Zim. Photo by Mark Hare.

The Peasant Movement of Papay and Service Chretien d’Haiti organized two consultations in the first half of 2009 that resulted in the constitution of a Joining Hands network for a new approach to anti-hunger ministry in Haiti. In June 2009, the network was formalized under the name of FONDAMA for “Fondasyon Men-lan-Men Ayiti” or “Foundation Hands in Hands Haiti.”

FONDAMA has decided to engage in a campaign against the use of agricultural land in Haiti for the production of agrofuels or more specifically jatropha. The cultivation of jatropha for agrofuel could heighten the dependency of Haiti on food imports and increase hunger among the unemployed or underemployed sectors of the population that do not have enough money to buy their food. Haiti has very little agricultural land available for food production, and jatropha is being cultivated on agricultural land to produce agrofuel for vehicles and machines, while current food production in Haiti is not even enough to satisfy the basic needs of the population. The theme of the campaign is “Agriculture for Food Production — Not for Agro Fuel.” 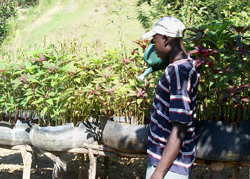 Some of the tires in Moccène’s home garden, filled with an abundance of Amaranth, or tropical spinach. Photo by Mark Hare.

In the United States we have established an informal network that is nongeographical and not tied to the middle governing body structures of the Presbyterian Church. This is a network of churches, individuals and organizations who are coming together to accompany FONDAMA in its campaigns. The U.S. network is coordinated by the Rev. Skye Murray of Louisville Covenant Community Church and includes Pix Mahler, PC(USA) liaison for Haiti, the Rev. Roy Howard of St. Mark Presbyterian Church in Maryland, Stephen Bartlett of Agricultural Missions, the Rev. Peter Reynen of South Dakota, Mr. Bazelais Jean Baptiste of Mouvman Peyizan Papay (MPP), Mr. Van Smith from the Church of the Savior in Washington, D.C., and the Rev. Mark Mueller from Huntsville, Alabama.

In the aftermath of the earthquake

Given the recent devastating effects of the earthquake on Haiti and the Haitian people, the FONDAMA network will be looking to adapt their long-term development strategies to the new realities of more intensified poverty and hunger in the aftermath of the earthquake.

Jatropha is well known in Haiti under the name of “medsiyen.” It is a wild shrub or small tree that is planted in rural fences all over the country. It is also indigenous to the land. Numerous varieties of it exist and it has various uses in traditional medicine. It is very hardy and will be found often as the greenest plant where most other vegetation is brown because of drought or poor soil conditions. So, what is the big deal about jatropha?

Since the 1980s, some scientific research has concluded that jatropha produces a seed that is very rich in oil, and that oil can be used with a minimum of filtration as fuel in diesel engines without requiring any special modifications to the engine or the oil. In the craze of the recent fuel price crisis, jatropha has emerged as a strong contender in the race to produce agrofuels, together with ethanol producing crops. Some say that it is better than other agrofuel crops because it would not be in competition with corn or sugar cane since it is not fit for human consumption. Apparently, the seeds of jatropha can fetch about $600 per hectare harvested in the Haitian market.

In recent months there has been quite a flurry of promotion of jatropha cultivation as a cash crop in Haiti. Businesses from the United States, from Brazil and even from Europe have initiated ventures with Haitian businessmen to establish plantations and/or to purchase and process seeds into oil for export. On the Web, one can find a number of articles extolling the virtues of jatropha and the opportunity it represents for Haiti. The country is known for its abundance of marginal land otherwise not appropriate for food crops production. The Haitian government itself has opened up the country’s gates to foreign investors interested in the production of jatropha. USAID and the Inter-American Development Bank are promoting jatropha and providing funding for Jatropha “projects.” Even churches in Haiti as well as in the United States have embarked on the promotion of jatropha and are actively pursuing production and marketing ventures with the aim of raising funds to help impoverished rural communities.

None of these would really be causes for concern if it weren’t for the following: