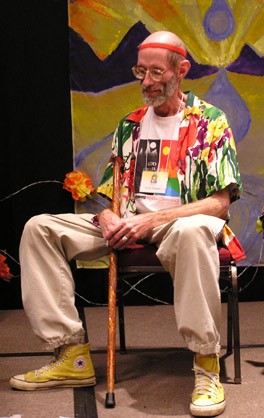 TUCSON — A pastor adept at keeping churches alive while steel towns die in the Monongahela River valley near Pittsburgh and a Detroit elder who continues to fight for better HIV/AIDS care, treatment and research despite the ravages of the disease in his own body were honored Jan. 15 by the Presbyterian Health, Education and Welfare Association (PHEWA) with its two top awards.

“Whether it was in Stamford, Connecticut, the Appalachians of Eastern Kentucky or the steel-making strip along the Monongahela River outside of Pittsburgh,” the PHEWA citation read, “Bill pastored and organized, never separating the church from the community or faith from action.”

“These congregations were all small, but they weren’t failures and they never thought of themselves as failures,” he said. “They were loving communities that respected all. Their love and fellowship was never predicated on agreeing with each other and they were committed to fairness, justice and meeting the needs of their communities.”

Stoepker, who is renowned for the colorful Hawaiian shirts he always wears, blinked back tears as he told the crowd gathered for the awards luncheon that “all I ever wanted was to bring color and joy, love and commitment to everything I could do to make our church care more and do more for people living with AIDS and for those who love them.” 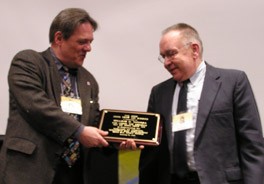 The John Park Lee Award is named for the Philadelphia native, born in 1903, who in the 1950s coordinated the health and welfare efforts of the Presbyterian Church through his work with the Board of Pensions and the Board of National Missions. He guided the National Presbyterian Health and Welfare Association (now PHEWA) through its organizational

The award was established in 1969 “to recognize and perpetuate the qualities of concern, sensitivity and involvement singularly exemplified in John Park Lee.”

The Rodney T. Martin Award, established in 1993, honors the man who served as PHEWA’s executive director from 1972 to1990. It’s awarded biennially to recognize “a significant long-term contribution to the ministry of PHEWA.”