The Rev. George and Kathy Todd 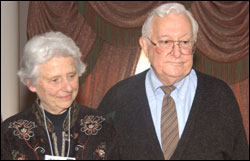 The Rev. George and Kathy Todd honored by PHEWA. Photo by Joseph Williams.

The award was presented Jan. 13 in New Orleans during the social justice biennial conference of PHEWA which has sponsored the award since 1969.

“The Todds have been in the forefront of the Presbyterian Church’s engagement with the world and commitment to justice,” said the Rev. Trey Hammond, pastor at La Mesa Presbyterian Church in Albuquerque, N.M., who nominated the Todds for the award. “Theirs has truly been a shared ministry, and they together and individually in their work have been advocates for economic justice, peace, urban concerns, and civil rights.”

“The Group Ministry of East Harlem Protestant Parish is considered one of the truly creative urban ministry experiments of the 20th century in this country,” Hammond said.

Kathy, whose family had been pioneering missionaries in Japan, met George while conducting her seminary fieldwork in the East Harlem Protestant Parish and joined the group ministry when the two married. The couple was central in the parish as its members addressed such issues as housing, health, gang warfare, narcotics, police corruption and public education, as well as developing influential innovations in liturgy, drama and music, Hammond said.

The Todds traveled to Asia in 1959 where they helped Presbyterian congregations adapt to the rapid social change from rural agricultural to urban industrial societies.  In 1963, George Todd was appointed to head the United Presbyterian Church in the U.S.A.’s Board of National Missions office for Urban and Industrial Ministries.

As the struggle for civil rights grew in the 1960s, George Todd created a cadre of more than 100 urban ministry specialists in response to what became known as “Crisis in the Cities.” He was also instrumental in the emerging congregation-based community organizing (CBCO) movement.

CBCOs are broad-based coalitions of congregations, faith-based groups and grassroots organizations that address quality-of-life and family issues such as affordable housing and access to quality health care.

Under George Todd’s leadership, the Presbyterian Church became the largest Protestant funder of congregation-based community organizing efforts, and remains so to this day.

In addition to family responsibilities (the Todds have four sons) Kathy Todd has worked with Head Start programs in the Newark, N.J., public schools.

The Todds went to work at the World Council of Churches in Geneva in 1972. George Todd was the director of the WCC office for Urban and Industrial Mission, part of the WCC Commission on World Mission and Evangelism. The office, working through regional offices based in Amsterdam, Hong Kong, Nairobi and Mexico City, sustained an ecumenical network of church-related activists working for justice and social change in cities throughout the world.

Kathy Todd administered the international office of Frontier Internship in Mission, a program recruiting young people from all regions for two-year assignments to work in crisis situation mission programs outside their own countries. After returning to the United States, she worked with an ecumenical urban training program in Chicago.

Starting in 1986 in New York City, Kathy Todd worked for 14 years on the staff of the National Council of Churches of Christ in the USA (NCC), first as part of an international church exchange program, including sending 800 people from the United States to participate in the 100th anniversary of the Russian Orthodox Church in 1988. Before retiring she headed the NCC Europe Office and then the International Justice and Human Rights Office.

When George Todd retired, he was named executive presbyter emeritus of New York City Presbytery. As presbytery executive, he worked to support racial-ethnic congregations and to keep churches vital in their communities.

In retirement Kathy Todd continues to be a non-governmental organization (NGO) representative for the World Student Christian Federation (WSCR) at the United Nations where she serves as co-chair of the U.S. trustees for the WSCF. She is active in her local senior center and has chaired the Global Justice and Peace Ministry of her local congregation.

“The Todd’s home continues to be an oasis of hospitality where visitors from around the world come to dream about the world as God intended,” Hammond said. “The Todds have nurtured hundreds of people on their life journey and in serving God.”

Hammond went on to say: “George and Kathy Todd exemplify, in their work and lives, a commitment to the coming reign of Christ. They truly embody the same commitment that John Park Lee exemplified in his life and ministry as he guided the Presbyterian Church in its efforts to promote ministries of health, welfare, and justice.”

Lee helped establish Presbyterian health and welfare ministries that consolidated in 1956 to become PHEWA. The award bearing his name recognizes a Presbyterian who has done “faithful and exemplary work” in social welfare and justice ministries and exemplifies the qualities of concern, sensitivity and involvement for which Lee was known.

The last recipient of the award, in 2005, was the Rev. Bill Thomas, who spent his entire 35-year career serving small church in economically stressed communities, mostly outside Pittsburgh, Pa.