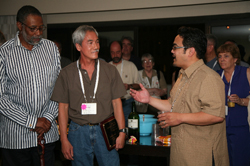 ATLANTA — Even those who weren’t familiar with the Rev. Phil Tom got an idea of why he deserves the Rodney T. Martin award, presented to him by the Presbyterian Health, Education & Welfare Association (PHEWA) during the group’s opening reception at the Big Tent event here June 11-13.

Among the adjectives friends and colleagues used to describe Tom — associate for Small Church and Community Ministry in the General Assembly’s Evangelism and Church Growth ministry area — during the presentation: inspiring, faithful, upbeat, innovative.

“I’m honored,” Tom said of the award, named for the late Presbyterian elder who, though not the first PHEWA executive director, “is responsible for all that is good with the organization today,” said the Rev. Robert Brashear, pastor of West Park Presbyterian Church in New York City and a past president of the social welfare organization umbrella group’s board of directors.

The award recognizes people who have found places in the church where people are marginalized or excluded and have welcomed them.

“This really represents all of us,” Tom said. “I’m just doing what all of us are doing.”

Several colleagues, particularly those who have worked in Presbyterian urban ministry with Tom over the years, heaped praise on the honoree. Several said his mentoring and encouragement have kept them in the church despite stress and discouragement.

“Phil has always taught me that the institution doesn’t own us,” said Bruce Reyes-Chow, moderator of the 218th General Assembly, praising Tom’s creativity.

Tom always has a good attitude and is great to work with, always telling people to “have a good day,” said the Rev. Nancy Troy, the GAC’s associate for Social Welfare Organizations and staff to PHEWA, a network of 10 membership groups that address such issues as serious mental illness, health care, problem pregnancies and abortion, HIV/AIDS, urban ministry, disabilities concerns, child welfare and advocacy, addictions, domestic violence and specialized pastoral ministries.

Warren Dennis, president of the PHEWA board of directors from 2007-09, was also presented with a plaque recognizing his service to the organization.

The PHEWA celebration at its welcome gathering here was somewhat tempered by the group’s response to the GAC’s decision in March to eliminate Troy’s position as part of overcoming a $10 million budget shortfall for 2009.

PHEWA leaders read a joint public statement from PHEWA and the GAC regarding procedures followed in making that decision and processes for addressing both group’s concerns going forward. The GAC and PHEWA operate under a covenant agreement that has been the basis for the conversations.

The statement grew out of two meetings between GAC and PHEWA leaders — the most recent on June 8 — and commits the two organizations to form three work groups to: