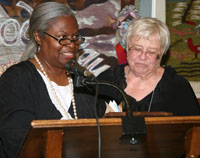 In the early 1980s, two of these three women began the ministry in small rooms in a house located on the property of First Presbyterian Church.  Today, LACASA’s shelter, no longer located in that old house, is recognized globally as a state-of-the-art facility.  Last year, with a budget of over 1.1 million dollars, LACASA served over 3,000 people.

Heidi Clausnitzer: Under Heidi’s leadership, programs serving children were planned, developed and implemented.  Her pioneering work led to the establishment of a 4-H Program, and a partnership with the Michigan Coalition Against Domestic and Sexual Violence. Today, Heidi is a member of the Board of Directors for LACASA.

The late Joyce Ewing: In the early 1980s, Joyce began her tenure as the director.  In her role as fundraiser, she made long and short, eloquent and passionate speeches.  Eventually, under her leadership, the organization raised enough monies to purchase its first shelter – an old house in Howell, Michigan.

The late Helen May:  In the early 1990s, Helen began her service as LACASA’s volunteer coordinator, a role she filled so well for almost 20 years.  Under her leadership, so many persons were recruited and trained to work with victims of domestic violence, sexual abuse and child abuse.  In short, lives were changed and transformed.