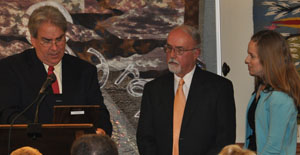 The Community Transformation Award, presented by the Presbyterian Association for Community Transformation (PACT), recognizes congregations that, through ecumenical or interfaith community ministry, or through a special ministry of the congregation, faithfully and creatively minister to and with the community. Rebuilding Hope In New Orleans (RHINO), New Orleans, Louisiana, is the 2010 recipient of this Award, presented at the PHEWA Ministry Awards Celebration Reception at the 2010 General Assembly in Minneapolis, MN.  Kate Snider and David L. White accepted the award and shared their ministry story.

Following Katrina, when everyone was scattered about, the displaced members of SCAPC were in Houston, visioning what would become RHINO. When everyone returned and started gutting out houses (a service RHINO provided as well), in early 2006 RHINO assembled a tract of land and developed a partnership with Habitat for Humanity, which they would later call Ferry Place.

Since the inception of RHINO, over 4,500 men and women of all ages have contributed to the rebuilding of New Orleans. Some came as many as six and seven times. If you plan a fall vacation or know a group looking to help others, please contact David L. White at by email or (504) 756-3550.

Where Oak Street meets River Road, a crowd gathered on May 8, 2010 to celebrate what Habitat for Humanity, St. Charles Presbyterian Church’s (SCAPC) RHINO, and hundreds of volunteers started in August, 2007. They celebrated the transformation of Ferry Place, one block of Pension Town, in New Orleans. They dedicated the last three of fourteen new houses. Secure, well-equipped homes replaced a bleak, blighted urban community’s last two unlivable houses, one of which burned down before the City could raze it like they did the other one. Councilwoman Susan Guidry joined teachers from the local elementary school, SCAPC members, Habitat staff, core volunteers and residents, to celebrate new homeowners’ accomplishments, the work of the many volunteers who came to work with the community, and to praise God’s faithfulness.

Volunteers installed a new floor in the local elementary school library, cleared property for a new community center on nearby Leonidas Street, helped Uptown residents after a tornado wreaked havoc, and tutored pupils in reading and math. The hospitality extended to volunteers by members of SCAPC overwhelmed them. Members invited volunteers to share dinner in their homes each week. They led tours of the City to show both progress and so much work yet to be done. They warmly welcomed volunteers into the Church’s Fellowship Hall, the Land Building porch, and the work sites.

Minnie manages a hotel in the French Quarter, but could not save enough money to make a down payment on a home mortgage. After Katrina/Rita/levees breach, her rent skyrocketed.

Simultaneously, she assumed the role of caring for two granddaughters. She read an ad for Habitat, called and enrolled in Habitat for Humanity’s home ownership program. She proudly owns a new home on Ferry Place, after investing 350 hours of sweat equity. She inspired everyone with whom she worked, including daughter Leandra, who will soon complete and proudly own her own new home.

A week with RHINO transformed a volunteer collegian from Wyoming. She found a job after college graduation and decided, with a family from her congregation, to share their home, while she gived the money she otherwise would spend on rent to fund another college volunteer at RHINO the next year. This shy, anonymous donor, as well as Leandra and Minnie, exemplify how God uses RHINO to transform people who transform the community.