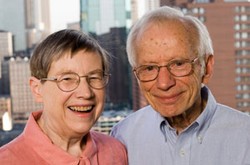 The partnership between Bebe and Rollie was formally begun with their wedding in 1952.  They have four children, Mike, Elizabeth, Carol and Doug.

As a young adult, Bebe was involved during the modern Civil Rights era as an advocate for social justice in church and community, leader in movement for school integration in Minneapolis.

She was a member of the Church of the Reconciler, Clearwater Florida, a United Presbyterian Church (U.S.A.) mission church organized to bring about reconciliation between racial groups. There, she developed a church school curriculum for inter-racial groups – Liberation Theology for children.

She was involved in writing curriculum materials for education resources for the UPC(USA) and later, for the Presbyterian Church (U.S.A.) over the course of approximately 20 years.

Bebe graduated from United Theological Seminary of the Twin Cities, was ordained in 1981 by the Presbytery of the Twin Cities Area and was called to serve the North Como Presbyterian Church in Roseville, Minnesota. She began to lose her sight soon after graduation, and lost most of her vision during the first year of ordained ministry.  During this time, she took to heart the encouragement that she was more than her vision.  She has turned her challenge into a ministry of urging the church to be truly inclusive and welcoming to people with all kinds of challenges.

Bebe served North Como Presbyterian Church as Assistant (later Associate) Pastor and Director of Christian Education until she “retired” in 1990 (and Bebe has failed miserably at being “retired”).

Bebe edited Reverberations: Clergywomen in the Presbytery of the Twin Cities Area commissioned by the PTCA Women’s Focus Committee.

Together they serve on the steering committee, Kwanzaa Community Church, working to build relationships between Kwanzaa and other congregations in the PTCA.

Her first contact with the Presbyterian Health, Education & Welfare Association was in the early 1990’s while she was chairing the PTCA Fragile Family Committee.  This interest led her to connect with PHEWA.

Rollie is best known to us currently as Bebe’s “reasonable accommodation,” but don’t be fooled by that.  He was ordained as an elder at Church of the Way, Shoreview, MN about 1968 and has served on sessions in three other congregations in the Twin Cities and in Florida.

He was ordained as deacon at Westminster Presbyterian Church, Minneapolis in 1993.

He has served on various Presbytery committees and task/forces including Research and Planning, Connectional Ministry, Council on Vocation, and Committee On Ministry – currently on Mission and Witness Committee and, with Bebe, serves on the Kwanzaa Task Force.

He served on Westminster’s Transitional Housing Committee for six years, mentoring six families.  He also worked on an Episcopal Community Services committee to expand the Transitional/Supportive Housing model with the help of a G.A. grant.

Bebe and Rollie Baldwin are a most remarkable and most effective partnership in every aspect of their lives together and the Presbyterian Health, Education & Welfare Association (PHEWA) joins with so many in being blessed by their service.  With gratitude for you, we present to you PHEWA’s 2011 Rodney T. Martin Award honoring significant long-term contribution made to the ministry of the Presbyterian Health, Education & Welfare Association (PHEWA). The award is named for Rodney T. Martin, Jr. who served as Executive Director of PHEWA from 1972 through 1990.

Thank you, Rollie and Bebe Baldwin.